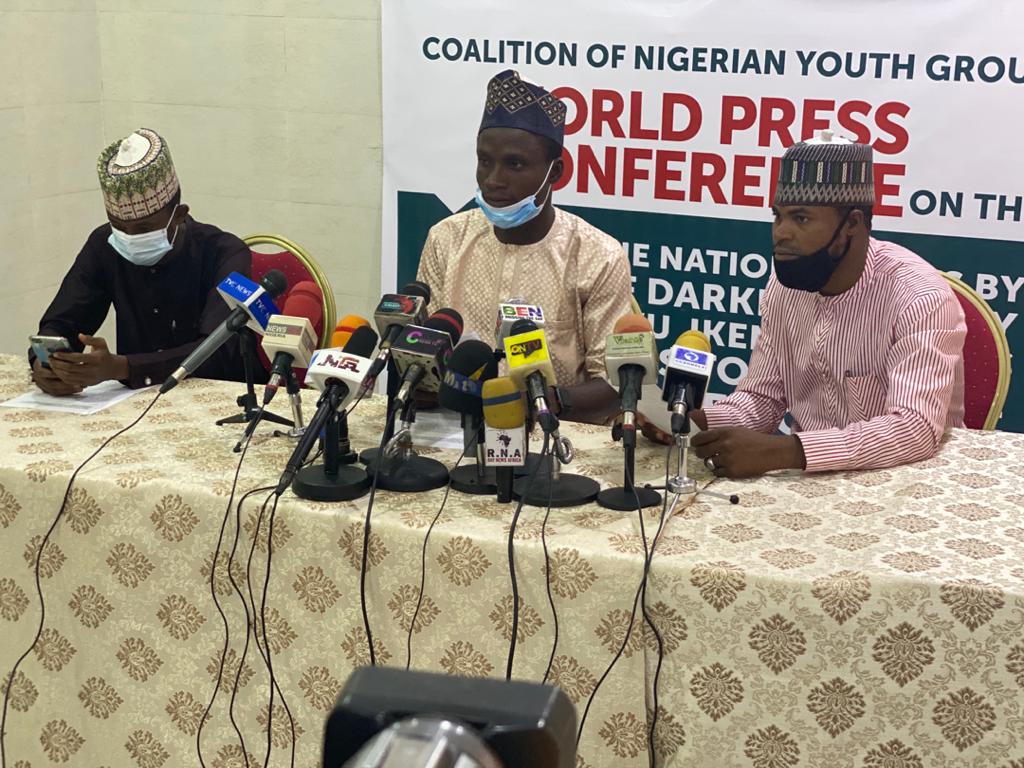 Some well-meaning Nigerian youths say they have uncovered a clandestine move by Coalition of United Political Parties (CUPP) spokesman, Ikenga Ugochinyere and some governors to mobilize youths across the country to cause an Arab Spring protest to destabilize the government of President Muhammadu Buhari.

The youth groups, totalling 50, under the auspices of Coalition of Nigerian Youths Groups (CNYG), though, vowed to resist a repeat of the wild anti-government protests, uprisings, and armed rebellions that cut across the Arab world in the early 2010s.

Led by Comrade Ibrahim Kabiru Dallah, the groups at a press conference in Abuja on Saturday said parts of the series of activities lined up for the evil agenda is to protest against the Security and Service Chiefs, blackmail top Buhari appointees with phantom corruption allegations and call for their resignation which after done will usher in officers that will be unable to curtail the protests across the country.

At that stage, the CNYG disclosed that most of their job is already completed as the protesters would freely pounce and hijack the government and install their paymasters.

Recall that Ugochinyere was recently arrested and released over a 4-count charge bordering on defaming Hon. Femi Gbajabiamila and the entire House of Representatives.

He had accused the leadership of the house of collecting $10 million bribe from the Bill Gates Foundation to pass the infectious disease control bill.

And according to CNYG, two oppoition governors, Nyesome Wike of Rivers State and Governor Waziri Tambuwal of Sokoto are aiming to exploit his new found fame to upstage the ruling government.

The groups added that the aim is to overwhelm the security architecture of the country and then blame the government for not doing enough to safeguard Nigeria.

CNYG, therefore, challenged the security agencies to bring Ikenga, his cohorts and sponsors to book before it is too late.

The group, however, warned that it will remain resolute, not allowing some selfish and narrow-minded people to drag the entire country into a mess.

Gentlemen of the press, the Coalition of Nigerian Youths Groups (CNYG) has received credible intelligence that one Ugochinyere Ikenga purportedly speaking for the Coalition of United Political Parties (CUPP) has been mobilized with the sum of 500 million Naira with the expressed brief to destabilize the administration of President Muhammadu Buhari. The 500 million naira allegedly came from two sources – namely – Gov Nyesome Wike of Rivers State and Governor Waziri Tambuwal of Sokoto state, who also handed down the brief.

The mobilization is a continuation of other ongoing attempts to instigate violence in several parts of the country under the pretext of protesting insecurity in these parts of the country. The particular modus operandi that Ikenga is meant to deploy is to mobilize protests that will direct violence against law enforcement personnel and will require the military to be brought in to regain control of the situation; the protesters will then provoke the troops deployed to manage the situation such that they will be compelled to use force. The CUPP’s spokesperson, Ikenga has reportedly secured the services of killers who will use government-issued ordinance to kill some of the protesters and blame the military for such deaths.

The objective of this devilish scheme is in multiple folds. First is that these sponsors, who mobilized Ikenga, are desirous of painting President Buhari as lacking in democratic credentials and consequently attract international condemnation to him for violently clamping down on protesters, even though these protesters would actually be killed by their own side. The projection of this axis of evil is that the protests will spiral into violence on a scale that will lead to the collapse of the government and consequently pave way for the People’s Democratic Party (PDP) to hijack the government.

The second objective is similar to the first one in that Ikenga’s sponsor is expectant that a violent clampdown on protesters will give them the leverage to have the military chiefs removed from office and thus pave way for more junior officers to come on board. This is based on the expectation that they can have officers of certain ethnic origins, who will be pliable to organizing a coup to overthrow the government and hand power to the Tambuwal as interim President and Wike as interim Vice President or vice versa.

Two youth groups, acting in conjunction with a faction of the youth council installed by the opposition, are also part of the plot. They have been given the marching order to congregate their members for the protests. They were specifically cautioned not to divulge to the people being recruited to protest that the gatherings are programmed to turn violent.

These are long-running plots of the PDP, which were hatched even before that party lost the General Elections of 2019. Gentlemen of the press recall that there had been concerns expressed about phase one of this evil plot, which was the instigation of violence to truncate the conduct of the elections. The successful conduct of the elections, which the PDP lost has seen the chieftains of that party implementing phase two of the plot that is about overwhelming the security architecture of the country and then blame the government for not doing enough to safeguard Nigeria.

They resolved on this change or government to truncate our democracy as the only viable way that the opposition can successfully come into power before the 2023 due date for a change in government. This they intend to achieve by mobilizing massive protests against the Service Chiefs, the Inspector General of Police and the Director-General of SSS. These hardworking individuals will be accused of sleaze through the publication of fathom allegations of corruption against them.

The exposure of that phase two has now made this desperate person to launch phase three, which is to isolate the military services from the government by getting President Buhari to sack the military chiefs and create a vacuum that will allow the killers recruited by the opposition to unleash full terror on the population. This is why part of the plot is to criminalize the military and the police such that they will become repulsive to associate with. Parts of the plot is to call on Nigerian troops and people of a particular ethnic group (Igbos) to withdraw their services from the military (Army, Navy, Air Force ) the Police and Department of State Services, citing a harsh clampdown on protesters and non-sacking of the military chiefs as reasons.

Another version of intelligence available to us indicated that Ikenga has reached out to fugitive from justice, fugitive from justice and leader of the Indigenous People of Biafra (IPOB), Nnamdi Kanu, to support in inciting serving officers and men of Igbo ancestry to desert or mutiny in the military.

The Coalition of Nigerian Youths Groups (CNYG) is calling for the immediate arrest and investigation of the arrowheads of these evil plots and their sponsors. Should the government elect to not arrest these people out of a fear of potential backlash, we want to tell the world that Nigerians will rise up to protect the country from coup plotters and any attempt to destabilize the government. Those angry at the result of the last elections in Nigeria should wait for the next election to test their popularity and not jeopardize the peace of the country.

We are sounding a note of warning to CUPP, IPOB and the youth arrest and investigation of the arrowheads of these evil plots and their sponsors. Should the government elect to not arrest these people out of a fear of potential backlash, that has been mobilized to burn the country that Nigeria is not the Middle East where the hapless citizens allowed crisis and protest contractors to burn down their countries over their heads? The countries that cheered on the Arab Spring protestors will today not accept refugees from the same places they laid waste to. This is why we remain resolute that we will not allow a group of selfish and narrow-minded people to drag the entire country into the mess they are attempting to create.

Our warning is easy to understand. Anyone that threatens the safety of Nigeria should be prepared for consequences.