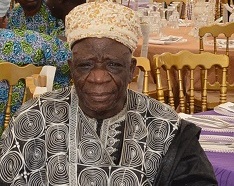 Magaji Nda of Ilorin, Alhaji Salihu Mohammed, speaks with TUNDE OYEKOLA on some allegations made by Moro Concerned Elders Movement that the Ilorin Emirate had been oppressing their people and preventing the proper grading of other traditional rulers in the Moro Local Government Area of Kwara State

People of Moro Local Government Area have been agitating for their exit from Ilorin Emirate over allegations of victimisation and oppression by the emirate, what do you think about it?

I’m speaking to you as Salihu Woru Mohammed and not on behalf of the Emir of Ilorin or the Ilorin Emirate.

The truth is that no Moro person is agitating for their exit from Ilorin Emirate. Those making noises are not indigenes of the area. Go and find out; they are strangers in that place. They are people whose fathers came to Moro, either to farm or do some other work there.

Moro and Ilorin are the same because most Moro people have houses in Ilorin. All of us are interwoven. My family is in Ogbondoroko in Asa Local Government Area and others have their families in all the local government areas making up the emirate; that is, Ilorin West, Ilorin East, Ilorin South, Asa and Moro local government areas, and we are all under the Emir of Ilorin.

Ilorin Emirate started many decades ago. If you can remember, Alfa Alimi started his Jihad which he brought to this place. He united the people and we have been living together peacefully. Those agitating that they want to move out are strangers; some are railway staff members who settled to live with us after their retirement. They only want to disrupt the good work and peaceful co-existence which Alimi achieved many years ago.

How would you respond to allegations that Ilorin Emirate appoints and imposes district heads and Alangua on the people, how can you defend that?

I want to tell you that those making the allegations are not saying the truth. Nobody is oppressing anyone. Those appointed as district heads and Alangua are indigenes of the various communities in Moro. For example, the district head of Malete was born there and his father’s house and burial ground are there. Also, the district head of Ejidongari has his grandfather’s burial site there. All the Alanguas are nominees of the people before the emir endorsed them for appointment. Also, all the sons and daughters of the local government areas in the emirate enjoy benefits, including scholarships. So, I don’t know the type of oppression that they are talking about.

Those people making the allegations want to cause division among us. I have advised them that if they want a separate local government, they should follow the Constitution by telling the state House of Assembly to work towards creating a new local government for them.

It was alleged that the Emir of Ilorin warned the state governor not to grade the Ohoro of Shao and Oba of Jebba, both in Moro Local Government Area, is this true?

I want to tell you that there was no time that the emir went to the governor to give such a warning. Those people are trying to cause trouble and make people disenchanted (with the system) by not saying the truth. I want to tell you that they’re not indigenes of Moro. The people of Moro have told us that they are not their sons; they are strangers. When Moro Students’ Union members paid me a courtesy visit, I advised them that as young persons, they should not allow themselves to be used for dirty jobs by politicians. And I advised that the governor should not grade traditional rulers under Ilorin Emirate. We have a way of doing things in the emirate; we don’t want division among our people. It is not a warning, it is an advice.

You have alleged that some people are trying to cause problems in the emirate, what kind of crisis?

It was alleged that the emir blocked the grading of traditional rulers in Moro Local Government Area while those graded in the past such as Ohoro of Shao and Oba of Jebba had theirs reversed. Why?

As far as I’m concerned, nobody has been graded in the five local government areas that constitute Ilorin Emirate. The Emir of Ilorin is the head and people are satisfied with him. He is the head and people live peacefully. There is peace in the emirate and the state. No traditional ruler apart from the emir is recognised.

The Ohoro of Shao and Oba of Jebba are rulers of their respective communities and they have a cordial relationship with the emir. Ohoro of Shao was a seasoned civil servant and he retired as a permanent secretary in the state civil service before he got to the throne. There is no function taking place in the palace that he does not attend. Even when I have something to do here, he comes and when he cannot come personally, he sends his wife, so there is a cordial relationship between them and the emir. Those people are not saying the truth about the emir; he is not the government that will grade them. How can he then reverse it?

How will you describe the relationship between Yoruba people and Fulani people in Ilorin?

The people of the emirate, whether Yoruba, Fulani, Baruba, Nupe, or Hausa have been living peacefully, so there is no problem. It is you people that want to cause problems among them. Look at places like Kano, Maiduguri, Ogbomoso and others, there are many tribes living there and there is unity. Nobody is worried about those leading them. The unity of this country is settled. It has been settled for long and nobody can divide us.

There are allegations that the Emir of Ilorin has not been sharing the funds from the local government area with other traditional rulers in the council, how would you respond to that?

The funds for the traditional rulers are being given to them. In Moro, we have many district heads and over 70 Alanguas. It is from the funds that they are paid and maintained. We also have Alanguas in Asa, Ilorin West, Ilorin East and Ilorin South local government areas and all of them are paid from the funds. Has anyone of them complained?

So, those people are making unfounded allegations and not telling the truth. What concerns me now is how to make the government succeed and I want to congratulate the governor, Mallam Abdulrahman Abdulrazaq, on his first anniversary in office. He has been trying to make life easy for the people. He has renovated roads and provided us with good drinking water. He is paying salaries of workers as and when due. We have to support him so that he can do more for the people. I also want to commend him for the way he has handled and curtailed the spread of COVID-19 pandemic in the state. We will continue to support him.

What advice do you have for the government?

First, I want to thank President Muhammadu Buhari for appointing our son, Prof Ibrahim Gambari, as his Chief of Staff. We believe he will use his experience to improve the government. The Emir of Ilorin appreciates the President. I also congratulate the President on his first anniversary in office for his second term.

I want to advise our governor to focus on governance by providing more of dividends of democracy. He should build more roads, and provide water, electricity and other things that would make life better for the people. He should not allow political jobbers to divert his attention.