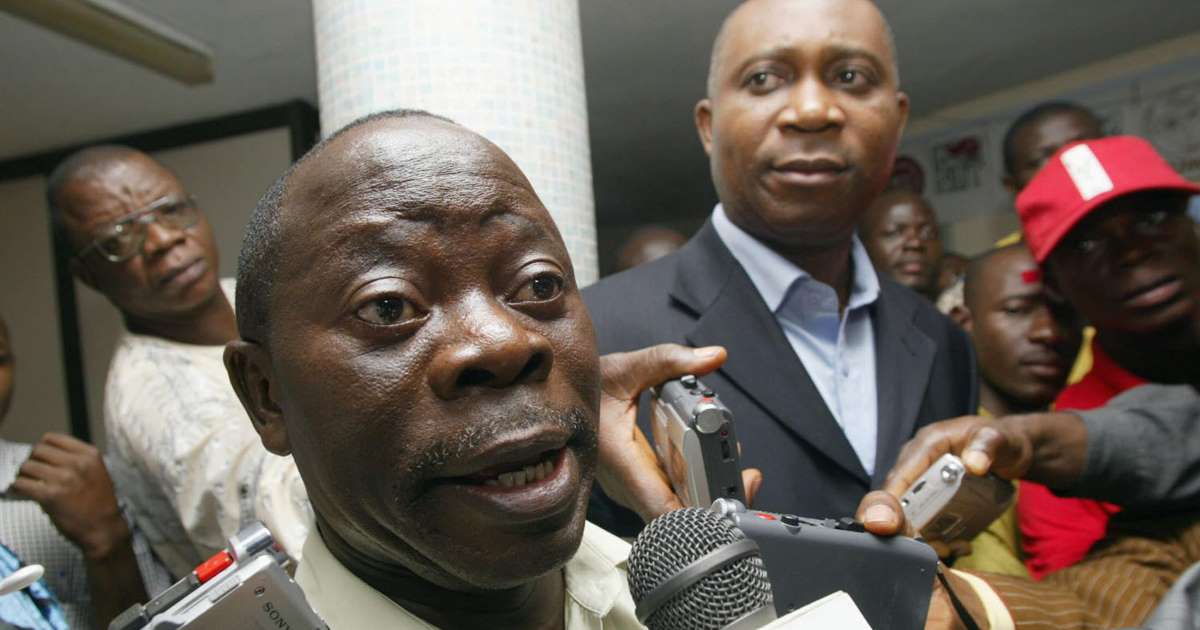 The immediate past National Chairman of the All Progressives Congress (APC), Comrade Adams Oshiomhole, on Saturday identified toppling the Saraki political dynasty in Kwara State as one of his greatest achievements.

In his first official reaction to the dissolution of the National Working Committee (NWC) of the All Progressives Congress (APC) by President Muhammadu Buhari on Thursday, Oshiomhole said he was proud that the party under his chairmanship was able to take over the governance of Kwara State from the Peoples Democratic Party (PDP)

“I remain proud that we were able to recover Kwara State. That was extremely important to us for reasons I need not to enumerate,” he told reporters in Abuja.

“I am happy we were able to recover Gombe State. These are strategic states. There are a couple of other things I cannot speak about,” he added.

Oshiomhole also said he had “accepted in good faith” Thursday’s dissolution of the party’s National Working Committee (NWC) by President Muhammadu Buhari, adding that he had no regrets for the actions he took while in office.

He said he had also directed his lawyers to withdraw the appeal he filed at the Supreme Court over his suspension from the party by his ward in Edo State.

This is in deference to one of the resolutions at the Thursday meeting that all legal actions against the party by members be withdrawn.

He said he had directed his lawyers to withdraw the case in the Supreme Court as a mark of respect for President Buhari for his support during his tenure as APC Chairman.

He recalled how Buhari “graciously invited me to run for the office of chairmanship of the party in 2018, precisely about two years ago,” and told him that “if we do not reform the APC, we can as well forget about the party.”

He said the reforms were challenging and entailed “difficult decisions.”

Oshiomhole said: “Mine has been a life of struggle and I accepted this and I believe I did my best.”

Reeling out his achievements, he said: “I am happy that at the end of the day, 2019 elections have come and gone. Thanks to the Nigerian people, our President had more votes in 2019 than we had in 2015. We have more members in the Senate and House of Representatives.

“Unlike 2015, we were not able to manage our victory in the two chambers such that we had an APC President in the Senate and PDP deputy Senate President.

“This time, working hard with my colleagues in the NWC and in consultation with leaders of our party across board, we had the kind of unity expected in the governing party in the two chambers of the National Assembly.

“I am happy that the leadership of the National Assembly is working harmoniously with Mr. President today.

“The APC under my chairmanship has done its best and the results are there. Of course we have now been dissolved and I have accepted that dissolution in good faith.

“I am not going into the question of legality or illegality. The bottom line is that the President who invited me to lead the party and who mobilised all the support for my emergence as chairman also presided over the meeting where the NWC has now been dissolved.

“As a demonstration of my loyalty to Mr. President, loyalty to our party and loyalty to the Nigerian nation, I have decided to accept the decision in good faith and to maintain my loyalty, my respect and admiration for President Muhammadu Buhari.”

The former Edo State governor was confident that the APC would emerge from its crisis stronger.

He said: “I want to assure everybody that APC will have peace, and by the special grace of God, President Buhari will achieve his three key principal promises he made to Nigerians, and I will give him all the support that I can give as a Nigerian and as a member of APC and, number three, as a loyalist of President Muhammadu Buhari.

In keeping with the admonition of the President during the Thursday meeting that all suits against the party by members be withdrawn, Oshiomole said he had instructed his lawyers to discontinue the appeal he filed at the Supreme Court over his suspension by his ward in Edo State.

He said: “I have instructed my lawyers to withdraw my case that is currently pending at the Supreme Court, which has to do with the issue of my suspension.

“Sustaining the legal action would be tantamount to disobeying one of the decisions that the President has made, namely, all cases should be withdrawn from court.

“I believe as a member of APC, I have a duty to live by example. I have taken a bow and accepted the decision of the NEC (National Executive Committee) in good faith, and I want to reassure Mr. President that my confidence in his leadership remains unshaken. My commitment to our party as a member remains unshaken.”

Responding to a question on his suspension, he said the dissolved NWC had ratified the lifting of the suspension, adding: “I am at peace with my people at home.”

Asked if he had regrets, Oshiomole was vehement. “I have no regrets. You cannot lead a party as large as APC in a country as diverse as Nigeria and expect that everybody would be happy with you. I have no regrets.

“At the end of the day, how do you judge the performance of a party? You judge it by its electoral outcome.

“I believe it is convenient for people to point at a few areas where we had challenges, few states that we lost. But also, there were states that we won.

“For example, it does not matter what anybody wants to say, I remain proud that we were able to recover Kwara State. That was extremely important to us for reasons I need not enumerate.

“In life, for every one thing that some people are clapping, there must be those who are not happy.

“Just look at a football match: when you score a goal, you will see some players almost crying and yet you see some other people jubilant as if that is the end of the world.

“That is the way life is. You cannot have it both ways. I assure you I do not regret anything.”