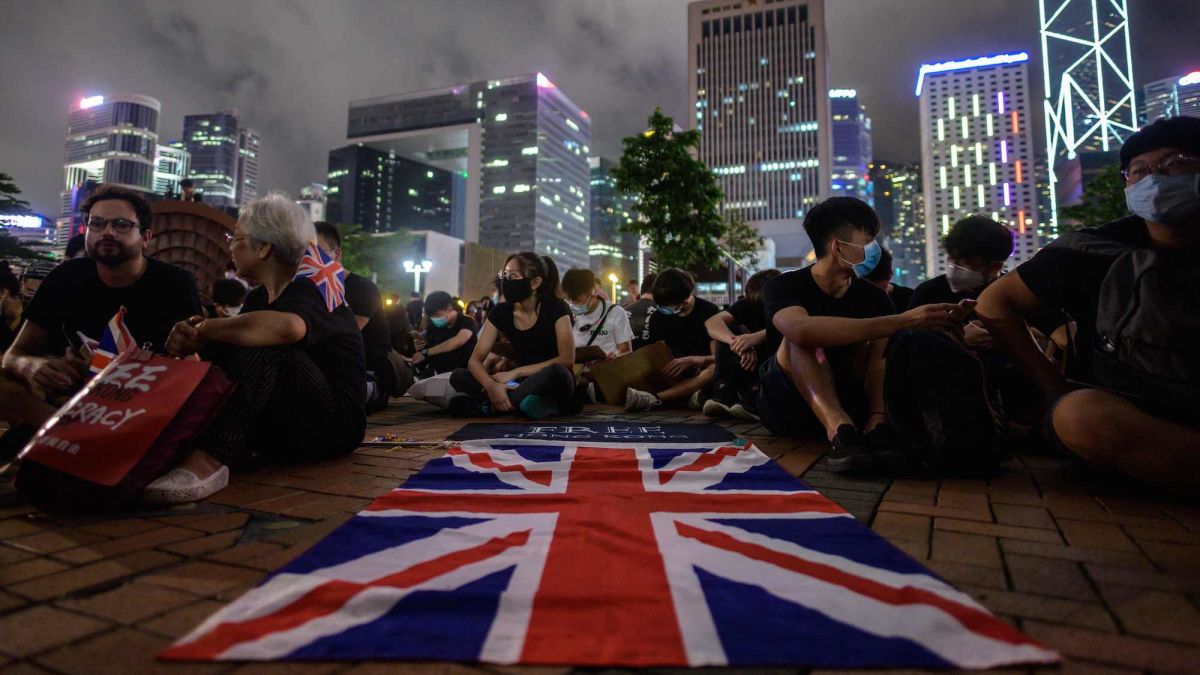 The United Kingdom said Wednesday it would offer a path to citizenship for eligible Hong Kong residents and condemned China’s new security law as a threat to the city’s freedom.

UK Foreign Secretary Dominic Raab said in an on-camera interview that after “carefully” assessing the contents of the new national security law, it constitutes “a clear violation of the autonomy of Hong Kong, and a direct threat to the freedoms of its people.”

He said it was therefore “a clear and serious violation” of the Sino-British Joint Declaration, which laid the groundwork for the city’s handover from British to China in 1997 and stated that Hong Kong’s existing system of government would remain in place for 50 years.

China’s central government on Tuesday night imposed a sweeping national security law that critics say has stripped the city of its autonomy and precious civil and social freedoms, and cements Beijing’s authoritarian rule over the territory.

China has passed a controversial national security law in Hong Kong. Here’s what you need to know
Hundreds turned out on Wednesday — the 23rd anniversary of the handover of Hong Kong from British rule to China — to protest the legislation in the busy shopping district of Causeway Bay,

They were met with a heavy security presence and at least 300 people were arrested.

Hong Kong Police announced in a tweet that nine of those arrested, five men and four women, were held on suspicion of violating the national security law.

The remaining arrests were linked to “unlawful assembly, a disorder in public places, furious driving, and possession of an offensive weapon.”

Prime Minister, Boris Johnson said Wednesday that his government will honor its promise to British National Overseas (BNO) passport holders, who could otherwise face imprisonment for acts such as protesting or campaigning under the new law.

The law dramatically broadens the powers of local and mainland authorities to investigate, prosecute and punish dissenters. In vague language, it criminalizes secession, subversion, terrorism, and collusion with foreign powers. People convicted of such crimes can face sentences of up to life in prison.

Several political and activist groups in the city formally disbanded on Monday in advance of the law being introduced. Shopkeepers tore down posters that supported anti-government protests, and many citizens hastily deleted social media posts and accounts.

Speaking during Prime Minister’s Questions in parliament, Johnson said: “The enactment and imposition of this national security law constitutes a clear and serious breach of the Sino-British joint declaration.

Andrew Wan, a pro-democracy lawmaker, is arrested by riot police during a protest in Hong Kong, China, on Wednesday, July 1, 2020. China described Hong Kong’s new security law as a “sword of Damocles” hanging over its most strident critics, after Beijing asserted broad new powers to rein in sources of opposition, from pro-democracy protesters to news agencies to overseas dissidents. Photographer: Roy Liu/Bloomberg via Getty Images

“It violates Hong Kong’s high degree of autonomy and is in direct conflict with Hong Kong basic law.

“The law also threatens the freedoms and rights protected by the joint declaration.

“We made clear that if China continued down this path we would introduce a new route for those with British National Overseas status to enter the UK, granting them limited leave to remain with the ability to live and work in the UK and thereafter to apply for British citizenship — and that is precisely what we will do now.”

The UK’s Foreign Office said in a news release that “this new bespoke immigration route” would mean eligible Hong Kong residents could move to the UK without the current six month limit, and would have five years limited leave to remain, with the ability to live and work in the UK.

It said the new route will be implemented in the coming months, with the exact date and further details to be announced in due course. “In the meantime, we will ensure British National (Overseas) citizens who wish to come to the UK will be able to do so, subject to standard immigration checks,” it added.

Announcing preliminary details to the House of Commons on Wednesday, Raab said that BNO passport holders and their dependents in Hong Kong who wish to come to Britain will be given five years’ limited leave to remain, with the right to work or study.

He said it was “depressing but necessary” to report that it was “a clear and serious breach of the joint declaration,” calling the arrival of the legislation “a sad day for the people of Hong Kong.”

As of February 24, 2020, there were 349,881 holders of BNO passports and the UK government estimates there are around 2.9 million BNOs currently in Hong Kong.

READ  Wadume: "Soldiers tried to kill me after policemen’s corpses were taken to Captain’s house"

The European Union has reiterated its “grave concerns” about Beijing’s national security law for Hong Kong, saying it is “essential that the existing rights and freedoms of Hong Kong residents are fully protected.”

A European Council statement on Wednesday said: “The European Union is concerned that the law risks seriously undermining the high degree of autonomy of Hong Kong, and having a detrimental effect on the independence of the judiciary and the rule of law.

“The European Union is assessing the implications of such a law and will continue to raise its concerns in its dialogue with China,” it added.