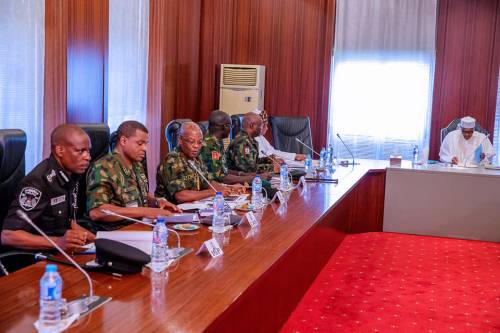 The Oduduwa Youth Vanguard, OYV, has commended President Muhammadu Buhari and the Service Chiefs for putting the heat on Boko Haram terrorists such that they are not able to operate beyond a tiny fringe in the Lake Chad region.

President of the OYV, Comrade Emmanuel Kolawole Abe, gave the commendation while appraising the success of the war against terrorism and banditry in Nigeria.

He said it is an indication of the sustained pressure against the terrorists that they have not been able to move about and cause havoc around the country as they wish but resort to hiding in border towns between Nigeria and other neighbouring countries to launch surprise attacks on soft targets just to give the impression that they exist.

The activist said anyone with fair knowledge of warfare would confirm that such tactics as deployed by the Boko Haram now are used by the losing side in a war as a means of propaganda.

Abe, who was one time, Public Relations Officer of the National Association of Nigerian Students (NANS), said when President Buhari initially renewed the tenure of the sevice chiefs, he was at a loss what informed the decision, but explained that it was later he began to see the strategic planning the chiefs were bringing into the war which has tilted the scale against the terrorists.

“The president was obviously seeing what we were not seeing and we commend him for acting true to his conviction which is now bearing fruit,” he said.

Abe said the efforts of the sevice chiefs would be better appreciated if Nigerians know the depth of planning that has gone into the war since this administration which has made it possible for the military to be recording series of successes continually against a side that is both suicidal and desperate.

He said another indication that the days of Boko Haram are numbered is in the fact that what was then considered a national security issue has been reduced to attacks on far removed communities.

“Before, even those of us in the Southwest were not sure what would happen next as kept hearing how they have moved from Borno to Kano to Abuja. But we are grateful to Mr. President and the service chiefs that we no longer harbour such fears,” he said.

Abe said “beyond that, the fight against the insurgents has moved from a battle between two sides to one in which one side is gasping for breath under the yoke of the pain inflicted by the other and the other is not relaxing its grip.

He said, “When people hear of attacks on communities,they get emotional and start calling for the removal of sevice chiefs without acknowledging the change and successes they have brought to bear on the war.”

The forme NANS spokesman said if not for the current set of service chiefs, Abuja and many parts of the north would have continued to suffer attacks and recalled that during the past administration, the fear was more about how to stop them from crossing the River Niger.

He explained that it is the coming of the current administration that the fear fizzled out as the military was able to kill a vast number of the terrorists while those that survived went into hiding in Chad until they had problems there and were flushed out by the Chadian government.

“Since then, the Boko Haram terrorists have remained subdued and life is going on as usual in the Southwest except for crime which are being handled by the police.

Kolawole thanked Lt. Gen TY Buratai for relocating to the Northeast at the time he did saying that action has saved Nigeria from what would have been several bloody attacks by the insurgents.

“It was when the army chief moved to the Northeast that Nigerians got the assurance they were looking for.

“It was at that time that the narrative changed to victory after victory culminating in the killing of 1429 terrorists in three months and the capture of over 100 of their collaborators,” he stated.

President of the OYV described those in the Southwest who are criticizing the military as ignorant saying they do not appreciate what the institution has done to Oduduwa sons and daughters.

He said, “Most people sit in their comfort zones and ask why Boko Haram is able to launch an attack at a particular location when they do so in probably a spate of three months but nobody is asking why the frequency of the attack has reduced from the daily occurrence in different locations that it used to be to the once in a while attack and run that it is now.

“Again people fail to ask why it is has become impossible for Boko Haram to attack major cities and towns as they were doing before but have to resort to attacking tiny settlements in remote areas to show that they still exist.”

He said Nigeria should consider itself lucky for having the current set of people at the helm of affairs of the armed forces otherwise the devastation would have been much if the Boko Haram have been allowed to continue with their bloody campaigns on the other side of the River Niger.

READ  Singer Bez Reacts To Arrests Of 500 Suspected Looters, Says It Was So Easy

Abe said it is an indication of defeat that the Boko Haram could only strike when the Chief of Army staff was reported to have left the Northeast to brief President Buhari on the progress made at the battle field as they did recently, saying it’s normal in any war situation for the loser to attempt daring attacks just to give the impression that they are around.

He said that however does not mean the terrorists areas strong as they would want people to believe but only be exhibiting a trait common with terrorists who are losing on all fronts but desperately seeking relevance.

He said, “The Yoruba nation at a time was taking about the establishment of the Amotekun because of the level of insecurity in the Southwest, but when the military moved against all criminals in different operations, the sensation about operating a regional security outfit died down.”

The activist also commended the operations of the military in the Northwest, Northcentral and other parts of the country saying the people now live in peace.