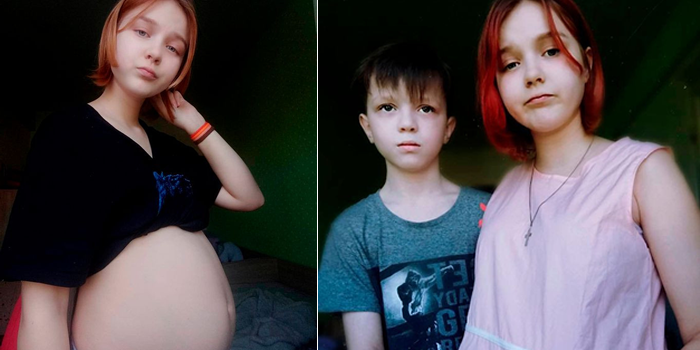 A girl who became pregnant at just 13 and alleged the father was a 10-year-old boy has reportedly given birth prematurely after being rushed to hospital.

An Instagram profile which gives 121,000 followers updates on Darya Sudnishnikova, now 14, claimed she had given birth and shared a photo of her appearing to be cradling a newborn baby girl.

It had initially been thought she was not due until September, but the teen later said as her pregnancy is so unprecedented “no one knows what week I can reach”.

In February she was reported to have been rushed to hospital with doctors fearing she could have a miscarriage.

Darya and friend Ivan, now 11 – who she initially said was the dad – previously appeared on Russian TV and vowed to raise the child together.

However, the young mum has since claimed she was actually s.e.xually assaulted and that the attacker is the real father.

She has described the alleged rapist as a 15-year-old and also a “very fat” man – and that the attack took place in her hometown of Zheleznogorsk – known for its nuclear production.

Reports in Russia some months ago had said a 15-year-old boy was put under house arrest after a complaint from Darya’s family.

Her family she said claimed Ivan was the dad to hide the fact she had been r*ped.

At the end of last month the Instagram page reported Darya had been admitted to hospital due to birth complications – and now claims she has given birth.

A caption written on behalf of the teenager said that Darya had a “premature birth” after she was “hospitalised by emergency doctors”.

It added that the birth took place in Moscow, and that images of the baby were available on her other private accounts.

Previously, she spoke of experiencing “painful contractions” while pregnant.

She had told followers: “Honestly, I am afraid to give birth. What pain there will be … And painful contractions.

“I was told that I will not hang on until August, but I will try my best for the baby to be full-term.”

She added: “I was forbidden to go out. It’s impossible even to go to the canteen, since it is a long way from the ward, and they bring food to me.”

It was reported that police have spoken to the man she has accused of r*pe.

The story sparked widespread controversy in Russia due to her age.