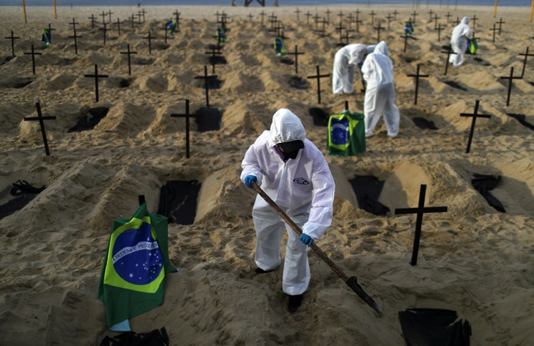 Brazil surpassed 70,000 coronavirus deaths on Friday, the health ministry said, though the number of daily fatalities appears to be stabilizing.

Brazil, a country of 212 million, is the second worst-affected country in the world after the United States.

The number of deaths has doubled over the last 35 days with Sao Paulo and Rio de Janeiro states the worst hit, respectively reporting 17,400 and 11,200 deaths.

In relative terms, though, Brazil has registered 335 deaths per million inhabitants, which is less than the US with 403 or Spain’s 607.

In four of the last five weeks, Brazil averaged more than 1,000 deaths a day.

Despite the outbreak showing no sign of slowing down, several states, including Rio and Sao Paulo, have started relaxing containment measures.

In Rio, bars overflowing with people and crowds crammed onto beaches have caused much concern.

“Our projections show that in this scenario, the number of cases will keep rising until October-November, with fluctuations,” Domingos Alves, Health Intelligence Laboratory coordinator at the Riberao Preto faculty of medicine in Sao Paulo, told AFP.

“It will be an effect of relaxing (confinement measures), contrary to the evidence collected by all the countries following World Health Organization recommendations.

“It won’t be about a second wave but rather an extension of the first one.”

The stabilization in the number of deaths masks the fact that while they are either unchanged or falling in the worst-hit states, they are increasing in previously less affected areas.

This could create a “boomerang” effect, Alves said, with health services in the interior forced to send patients to large urban centers — where cases are falling — that have a greater treatment capacity.

Critics say the government of far right President Jair Bolsonaro has failed to give a unified message on how to combat the virus, with state governors leading the response.

Bolsonaro has even gone so far as to flout containment measures such as social distancing and the wearing of face masks, and blasted governors over lockdowns that have hurt the economy.

The 65-year-old revealed on Tuesday he had contracted the virus, but said earlier Friday he was feeling “fine.”

He said he’d taken the anti-malaria medication hydroxychloroquine and that “it worked” — although its effectiveness has not been formally proven and the issue is deeply dividing the global scientific community.