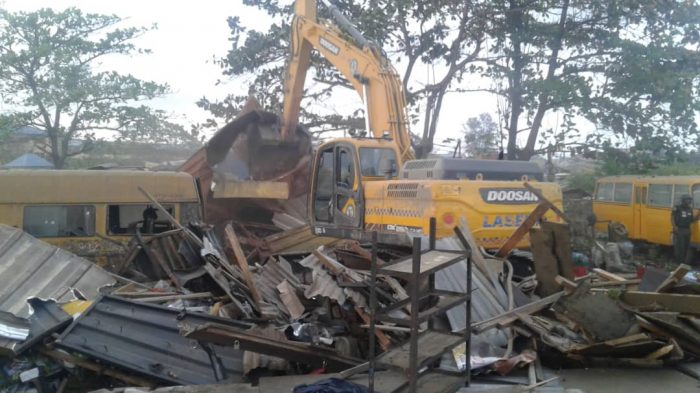 The commissioner made this known during a visit to the site of the three-storey building which collapsed in the early hours of Saturday on Freeman St. Lagos Island.

“When we capture a building as distressed, people need to be moved out immediately, which we have been doing.

“However, when you move them out, they will still come back after the officers from these emergency management agencies leave,” Salako said.

“The greed of developers, economising building materials for maximum gain also led to easy collapse of these buildings,” he said.

Salako said government would be at the forefront of detecting these distressed buildings and demolish them.

Oke-Osanyintolu said that combined efforts of different emergency management agencies helped in rescuing the survivors who were being attended to medically.

“The Ministry of Physical Planning, LASEMA, the Nigeria Police Force, the Nigerian Army amongst others, helped to rescue nine people who are presently receiving medical treatment and are in stable course,” he said.

Oke-Osanyintolu, however, said that the particular building had been marked for demolition because it failed the integrity test done on it by the Lagos State Building Control Agency (LASBCA).

“They, however, refused to adhere to the warnings which had resulted in the loss of lives and property,” he said.

Oke-Osanyitolu said that Gov. Babajide Sanwo-Olu had made sure that the safety of lives and property remained paramount to his administration.

“There are laws and building regulations on ground to ensure security of lives and property which people must adhere to.

“We are appealing to the people of the state to live in a responsible way and ensure that safety is paramount to what they are doing.

“In as much as the government has done the needful, our people need to abide by the rules and regulations of the state,” the LASEMA boss said.