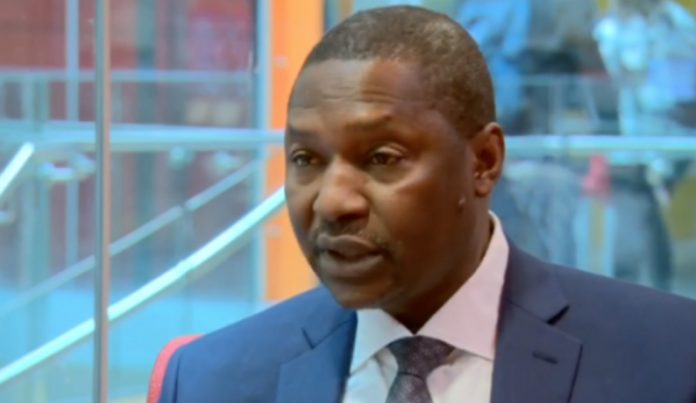 Abubakar Malami, the Minister of Justice and Attorney General of the Federation has denied reports that he purchased a house for his son, Abdulazeez who tied the knot on Friday, July 10, describing it as mischievous and deceitful.

Abubakar Malami purchased a mansion for Abdulazeez as a wedding gift.

It was also reported that the wedding ceremony flouted all NCDC guidelines for mass ceremonies.

Reacting to the allegations via a statement released by his media aide, Umar Gwandu on July 11, the Minister denied claims he bought a house for his son.

The minister denied reports that the wedding ceremony flouted NCDC guidelines and further disclosed that he did not hire the service jet companies to ferry some persons to Abuja for the wedding.

The attention of the Honourable Attorney-General of the Federation and Minister of Justice, Abubakar Malami, SAN has been drawn to a mischievous, deceitful and perfidious publication by the notorious factory of fake news in Nigeria, the Sahara Reporters with an intent to spread lies.

It is regrettable that the information communication technology tools have been hijacked by disgruntled elements in spreading fake news and blatant lies.

The report by the media is a clear violation of ethical journalism practices on verification of facts and authentication of claims. It evinces lack of professionalism and exposes rash and reckless presentation of figment of imaginations shrouded with bigotry and bundled with sentiments of unscrupulous questions.

For instance, who is the vendor of the purported house bought for the son of the Minister in Abuja at N300m? Where is the so-called mansion located in Abuja? Where are the title documents?

While refuting the claim, Malami said “God knows that I did not purchase any house for him in Abuja. Not even a rented house was secured for my son in Abuja, because he has no plan to live in Abuja”.

The allegation of hiring private jets for the marriage was preposterous. It is common knowledge that the Attorney-General of the Federation and Minister of Justice had neither a father nor mother anywhere in Nigeria to be conveyed to Kano for the wedding. Who, then the Attorney-General is using the chartered flight to convey? Which jets are chartered? Who paid for the charter? Through which means was the money paid?

It is one of such libelous publications of which Sahara reporters is commonly known for targeted at selected few for unsubstantiated fabricated allegations while overlooking more serious reasonable allegations visibly open against its favoured sectional kingsmen.

Dr. Umar Jibrilu Gwandu
(Special Assistant on Media and Public Relations Office of the Attorney-General of the Federation and Minister of Justice) Saturday 11th July, 2020