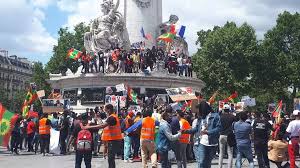 Ethiopia has seen deadly unrest since Oromo singer Hachalu Hundessa was shot dead at the end of June, with Oromos denouncing their marginalisation within a country that many experts are saying is becoming an authoritarian regime once more – despite the election of Nobel Peace Prize-winning Prime Minister Abiy Ahmed in 2018. Oromos in Paris gathered to protest on Monday.

As they gathered around the statue holding aloft the flame of liberty at Place de la République – a major site for demonstrations in the French capital, near the ultimate symbol of protest, the Bastille – the Oromo protesters made their anger clear. Placards and banners read “Free all political prisoners”, “Abiy Ahmed, dictator” and “Justice for Hachulu”.

The demonstration was organised in response to the killing of popular singer Hachalu Hundessa, who was seen as a crucial voice for the Oromo people in Ethiopian politics. The day after he was shot dead in the capital Addis Ababa, crowds of demonstrators converged on several big cities – especially in the Oromia region, which surrounds the capital.

Violence soon flared, with at least 239 people killed in the protests that shook Ethiopia last week, according to the country’s police. Authorities said some people were killed during the security crackdown while other were killed in clashes between different ethnic groups. More than 3,500 suspects were arrested.

The Oromo demonstrating in Paris were worried about this crackdown and expressed support for sweeping political change. “We need equality and justice in our country,” said Mussa, a 25 year-old migrant from Ethiopia.

Notably, a statement from the association organising the demonstration said that Hundessa was murdered “on government orders”, motivated by the fact that “He was Oromo”. Since then there has been a twist in the case. On Friday, Ethiopian Attorney-General Abebech Abbebe said that “the assassination was intended to be a cover to take power from the incumbent by force”, without providing details.

Abiy Ahmed is himself an Oromo. But the community is divided. “There’s a civil war going on within the Oromo group at the moment,” said Ethiopia specialist René Lefort. “Oromo are fighting against other Oromo; there are those who support Ahmed and those who have taken up arms against the government,” Lefort said.

At Place de la République, one protester who gave her name as Duniya argued that Ahmed has not done enough for the Oromo: “We thought that Abiy Ahmed supported our cause because he is Oromo, but over the past year Ethiopia has became a dangerous country for us,” she said.

This is part of a broader “repression of human rights, which affects everyone in the country”, added Fisseha Tekle, an Amnesty International Researcher on Ethiopia.

Ethiopia is becoming “more and more of an authoritarian regime”, Lefort said. He noted in particular the “thousands of political prisoners locked up all over the country” and “a press that’s starting to censor itself”.

The demonstrators in Paris also denounced these abuses. “The internet has been cut off in Ethiopia since June 30; we don’t know how our families are,” Mussa said. “We don’t know what’s going on in Ethiopia from day to day,” Duniya added.

Ahmed was not always such a divisive figure. In April 2018, his electoral victory was seen as heralding a brave new world – with the release of thousands of prisoners, the lifting of bans on hitherto repressed opposition parties and the repeal of illiberal laws. To cap it all off, Abiy was awarded the 2019 Nobel Peace Prize for creating a peace deal to end longstanding conflict with neighbouring Eritrea.

But modern Ethiopia’s first-ever Oromo leader has failed to maintain the soaring popularity that characterised his honeymoon period, especially amongst the Oromo ethnic group. “Ahmed has done nothing to stop the country from being torn apart by inter-ethnic conflicts,” Lefort said. “His main objective is to assert his power.”