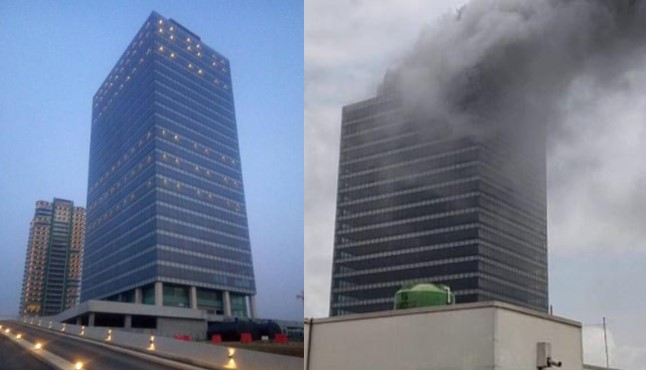 Fire on Monday engulfed a section of the World Trade Centre building located in the Federal Capital Territory, Abuja.

Eyewitnesses said that the fire started from the top of the skyscraper which dots the skyline of Central Business District, Abuja.

Smoke could be seen billowing from one of the buildings on Monday.

The cause of the fire is not yet known but eyewitnesses at the scene said it may have been as a result of electrical fault from the power source being used for the construction of the building.

Also, the extent of damage could not be ascertained and there is no report yet that anyone was injured in the fire.

Firefighters were sighted at the incident scene.

Spokesperson of the Federal Fire Service FFS, Ugo Huan who confirmed the incident said personnel of the service were immediately drafted to the scene and they succeeded in putting out the fire.

Since it began in 1939 in New York, United States, the World Trade Centre brand has since become global trade hubs in more than 90 countries including Nigeria.