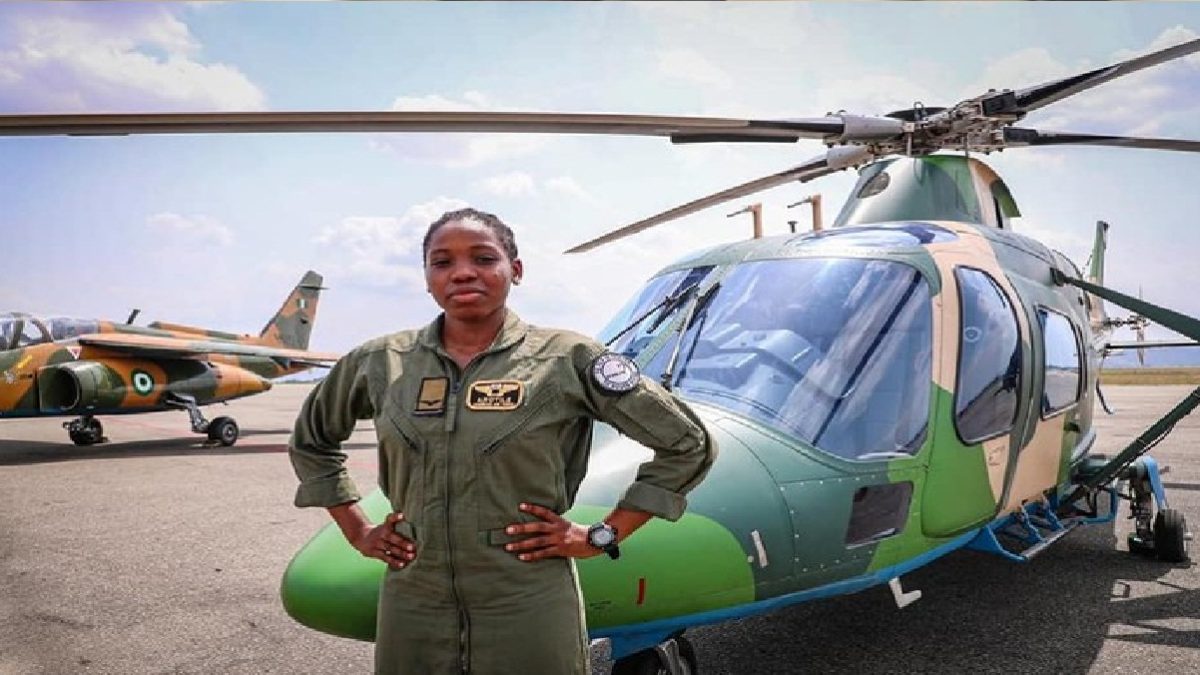 The Nigerian Air Force has lost its first female combat helicopter pilot, Flying Officer Tolulope Arotile. She died in an auto crash on Tuesday. The young officer was killed by a reversing car inside the Air Force base in Kaduna. The car was driven by her old schoolmate.

Air Force Director of Public Relations and Information Air Commodore Ibikunle Daramola, in a statement in Abuja, said: “Flying Officer Arotile died on 14 July 2020 at the age of 24, when she was inadvertently hit by the reversing vehicle of an excited former Air Force Secondary School classmate while trying to greet her.

“Born on 13 December 1995 to the family of Mr and Mrs Akintunde Arotile in Kaduna, Flying Officer Tolulope Oluwatoyin Sarah Arotile hails from Ijumu Local Government Area of Kogi State. She attended Air Force Primary School, Kaduna from 2000 – 2005 and Air Force Secondary School, Kaduna from 2006 – 2011 before she later gained admission into the Nigerian Defence Academy, Kaduna as a member of 64 Regular Course on 22 September 2012.

“Flying Officer Arotile was commissioned into the Nigerian Air Force as a Pilot Officer on 16 September 2017 and holds a Bachelor of Science in Mathematics from the Nigerian Defence Academy.

“Flying Officer Arotile was winged as the first-ever female combat helicopter pilot in the Nigerian Air Force on 15 October 2019, after completing her flying training in South Africa. She holds a commercial pilot license and also underwent tactical flying training on the Agusta 109 Power Attack Helicopter in Italy.

“Incidentally, she introduced the newly acquired Agusta 109 Power Attack Helicopter to the President, Commander-in-Chief of the Armed Forces of Nigeria, President Muhammadu Buhari, during the induction ceremony at Eagle Square in Abuja on 6 February 2020.

“The Chief of the Air Staff, Air Marshal Sadique Abubakar, on behalf officers, airmen, airwomen and civilian staff of the Service, consoles with the family of late Flying Officer Arotile over this irreparable loss. May her gentle soul continue to Rest in Peace.”

President Muhammadu Buhari, in a statement by his Special Adviser on Media and Publicity, Mr Femi Adesina, said the brief life of the late Arotile impacted on the nation immensely.

“President Muhammadu Buhari received with deep pain the passing of Flying Officer, Tolulope Arotile, condoling with the family on the loss of such a promising officer, whose short stay on earth impacted greatly on the nation, especially in peace and security.

“The President salutes Arotile’s bravery in the field to protect the country from the onslaught of bandits and terrorists, assuring that her memory will be indelible, and her efforts remembered.

“President Buhari commiserates with the Nigerian Air Force, airmen, airwomen and all friends of the deceased, recalling her deft skills in manoeuvring combat helicopters, which he had physically witnessed with pride.

“The President sympathises with government and people of Kogi State on the loss.

“President Buhari prays that the Almighty God will receive the soul of the departed, and comfort the family she left behind,” the statement said.

The Senate President commiserated with the government and people of Kogi State over the loss and prayed for her soul to rest in perfect peace.

She expressed her condolences to the family, friends, and colleagues of the deceased, as well as the Nigerian Air Force.

“The deceased was an intelligent young woman, a huge potential, a representative of both Nigerian women and youth, and what they could achieve,” her tweet said.

Gen. Magashi, in a statement by his Special Assistant Media and Publicity, Mohammad Abdulkadri, said: “We have lost a brave, gallant, courageous and patriotic Nigerian at a time when her service is needed most to upscale the tempo of counter-terrorism and war against banditry plaguing the nation’s security architecture.”

Kogi State Governor Yahaya Bello, in a condolence message in Lokoja by the Governor’s Chief Press Secretary, Mr Onogwu Muhammed, described the late Arotile as not only a combat pilot but a fantastic aviator.

He said she reached the sky of her professional calling at a very tender age of 23.

“It was with great sorrow and shock that I received the news about the passing of Flying Officer Tolulope Arotile, the first female combat Helicopter Pilot in the history of the Nigerian Airforce.

“Late Flying Officer Arotile brought the country to a standstill on the 15th of October 2019 when she was decorated as the first female Combat Helicopter Pilot.

“This was a huge honour to her family, Kogi State, the nation and the entire women in the country and beyond,’’ Bello said.

The governor said that Arotile was a trained military aviator with a blend of professionalism and patriotism.

He said her engagement in air-to-ground combat in rooting out armed bandits and other criminal elements in the country, particularly in the North Central region was a sacrifice that could not be forgotten.

“We are devastated by the tragic death of this young promising lady who took bravery to the next level, demystified prejudicial stereotype and flew her parents, state and nation high in honour and professionalism,’’ he said.

Bello stressed that the late Arotile had woven her own story into the Nigerian folklore as a patriot who died in defence of her nation.

“On behalf of the state, I commiserate with the family of late Flying Officer Arotile over this irreparable loss, and I pray that the Almighty God grants her soul eternal rest; she will be sorely missed,” the governor said.

About the late combat pilot

The late Arotile graduated at 22 years as one of the best flight students from the NAF Academy which qualified her for the helicopter training she received in South Africa where she came out tops with a commercial pilot licence and proceeded to Italy for training on the Agusta 109 Power Attack Helicopter.

She brimmed with confidence and patriotism at the Eagle Square Abuja on February 6, when she introduced the newly acquired Agusta 109 Power Attack Helicopter to Buhari during a ceremony to induct the copter into NAF fleet.

Her feats did not come as a surprise to those who knew her. Her colleagues saw her as dutiful, loyal, selfless and patriotic. She was intelligent and a great team player. She helped to wage fierce battles against terrorists and armed bandits in various operations in Northwest.

Born on December 13, 1995, in Kaduna State to Mr/Mrs Akintunde Arotile, the deceased officer was passionate about the military since she was a kid. She attended Air Force Primary School, Kaduna (2000 – 2005), Air Force Secondary School, Kaduna (2006- 2011) before she gained admission into the Nigerian Defence Academy (NDA), Kaduna, as a member of 64 Regular Course on September 22, 2012, where she graduated with honours in Mathematics.

In an interview last October 15, the late Arotile said: “I joined the military simply out of a passion for it. Being military personnel has been a long time ambition, the carriage and what it stands for are simply exceptional.

“Throughout my training, I have always looked towards flying. So, in the fifth year during our training we were selected for the Basic Flying Training, we were five cadets at the NAF Base Kaduna.? So, we started flying there. We completed the ab-intio flying course in 2016/2017, then after a year, I proceeded to South Africa for training. The journey has been very interesting and nice.

“Now, I have about 460 hours of flight within 14 months with the helicopter and the major thing I have come to realise in my field is that there is just no break in my career, you just have to keep pushing and doing your best. “My advice to younger ones out there is that they should keep doing their best, they should keep running the race until they finish and they should not set a limit for themselves because the only limit they have is the one they set for themselves.”