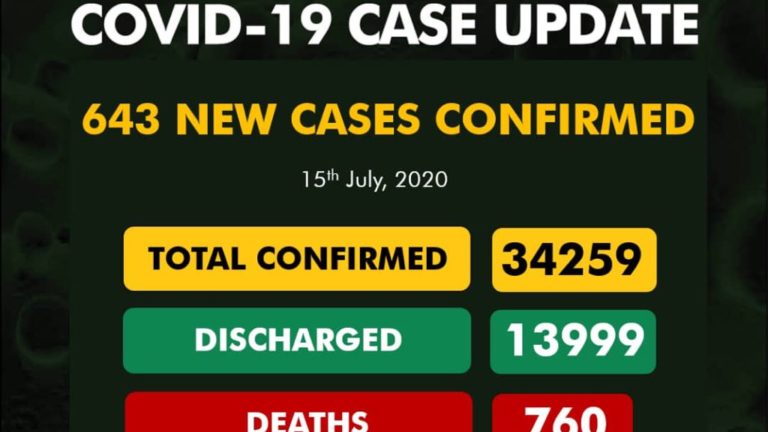 The Nigeria Centre for Disease Control (NCDC) has announced 643 new COVID-19 cases in the country as total infections from the virus rise to 34,259.

The NCDC disclosed this on its official twitter handle on Wednesday.

The centre said that 643 new confirmed cases and six deaths were recorded in the country as of July 15.

The agency said that no new state had reported a case in the past 24 hours.

According to the centre, till date, 34,259 cases have been confirmed, 13,999 cases discharged, while 760 deaths have been recorded in 36 states and the Federal Capital Territory (FCT).

Meanwhile, the agency in line with the national strategy on testing has continued to scale up diagnostic capacity for COVID-19 in the country.

‪Therefore, ”53 laboratories have now been activated for COVID-19 testing across 31 states in the country.

”These include Federal‬, State‬, Private, and GeneXpert laboratories,” it announced.

‪The News Agency of Nigeria (NAN) reports that the NCDC said it has responded to the COVID-19 pandemic in a whole-of-society approach.

It added that its primary goal is to ensure that states took ownership and drove the response.

According to the agency, COVID-19 spreads mainly among people, who are in close contact with one another less than six feet.

It stressed the need for the wearing of a cloth face-covering in public settings and when around ”people not living in your household”.