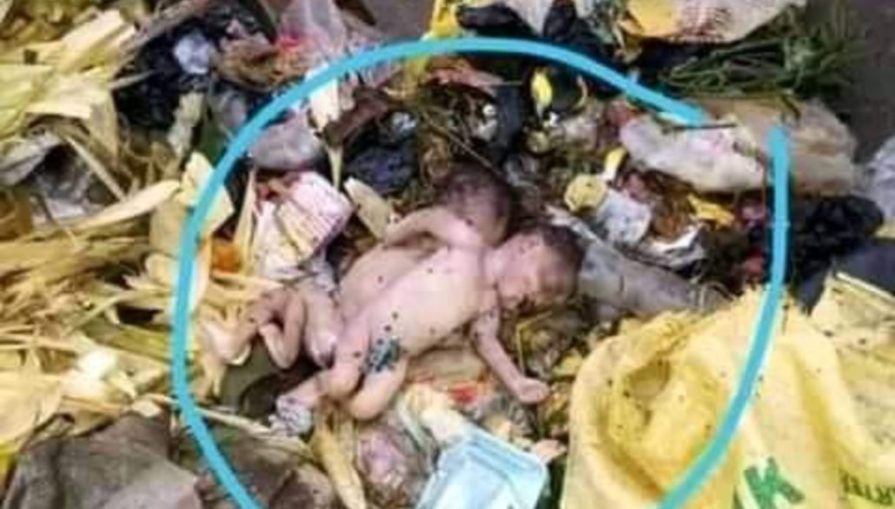 On Friday, passersby found twins abandoned by their mother in a dustbin dead on Friday morning in Calabar, Cross River State, TopNaija reports.

It was gathered that the woman who is at large delivered the babies and dumped them in the waste dump on Thursday, July 16, 2020, at Mayne Avenue extension by Goldie Street, Calabar South local government area.

Eyewitnesses on Friday morning revealed that they woke up to see the beautiful twins lying dead in the cold dump without even a pair of clothes.

“At about 7am this morning when I went to dispose my refuse, I saw people gathered at the waste bin – with some murmuring. When I moved closer, I saw a pair of between twins lying without clothes. When I checked further, I noticed that their umbilical cord is still intact, but there’s no life found in them.

“It’s such a pathetic act. I am a woman and I know the pains I went through while giving birth to my children. Why on earth will a woman pass through the pains of pregnancy, labour and then abandon the babies in such a cruel place to die? I am still wondering why.

“May be it is these young girls that don’t keep their legs close. It is a pity and a cruel act”, a resident of the area who gave her name as Eka Divine accounted.

How abandoned twins were found dead in Calabar wastebin topnaija.ng

Another eyewitness, Randy Emmanuel, said the dead twins were found in a dustbin located at Goldie by Mayne Avenue. He said, “Around 7:30am when we were returning from the church, we went through Mayne Avenue by Goldie where there is a dustbin. We saw the twins. By then they were lifeless. I don’t know if they were alive when they dumped them there.

“Around 9am, someone passed there and returned home to tell us about it. That morning, everybody who passed there watched the dead kids and since I was with my phone, I had to snap it.”

It was gathered that the bodies were evacuated from the scene later in the day by some officials. The state Police Public Relations Officer, DSP Irene Ugbo, said she was not aware of the incident.

She added, “They have been calling me in respect of that. I have called all the divisions to ask if they saw any twins and they said no. I don’t know where they took the twins to. Nobody has reported to the police.”