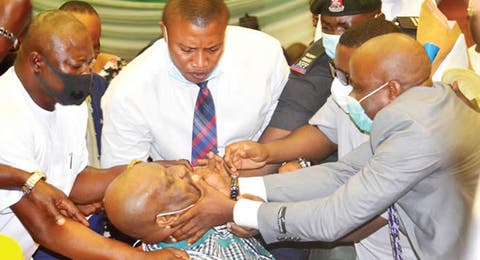 I just told you that we have records to show that most of the contracts in the NDDC are given to members of the National Assembly but you (Boma) don’t know about it. The two chairmen (Senate and House) can explain to you – Akpabio

You said you had no link to any contract – between yourself and the NDDC – that your job was just to supervise; but correspondences show that they (BPP) are giving you approvals for forensic auditors – Koko

The Minister of Niger Delta Affairs, Senator Godswill Akpabio, on Monday said most contracts of the Niger Delta Development Commission were awarded to members of the National Assembly.

Akpabio said this in Abuja at the sitting of the House of Representatives committee investigating the NDDC.

Also on Monday, the NDDC acting Managing Director, Prof Kemebradikumo Pondei, slumped while being interrogated by the lawmakers.

Besides the forensic audit of the commission ordered by the President, Major General Muhammadu Buhari (retd.), both the Senate and the House of Representatives are currently investigating alleged financial recklessness in the commission.

Pondei and other top officials of the NDDC had on Thursday walked out of the House of Representatives committee probing the commission after calling for the resignation of its Chairman, Mr Olubunmi Tunji-Ojo, accusing him of “crime against the commission.”

When the committee began its sitting on Monday, its chairman, withdrew from the probe and his Deputy, Thomas Ereyitomi, presided over the hearing.

Pondei was the first to make his presentation when the committee resumed its sitting at 12noon on Monday.

He said between January and May 31, N34bn was given to the NDDC by the Federal Government. He said out of the expenditure from October 31, 2019 to May 31, 2020, the current interim management committee led by him spent N59.1bn out of the N81.5bn spent by the NDDC within the period. He informed that he assumed office on February 20, 2020.

“Out of the N51.9bn, it is also verifiable that N38.6bn was spent on capital projects. The IMC published a list of contractors who have been paid up to May 5 (a total sum of) N35.3bn and no contractor said he was not paid. In all this, the IMC did not award any of those contracts; they are historical contracts that existed before we came.

“On recurrent expenditure, N20.5bn was expended by the current IMC between February 20 and May 31, 2020. It is good to note that a large proportion of the payments were from a backlog of expenditure that the previous managements had incurred and did not pay.”

The committee asked Pondei about the N1.5bn spent on COVID-19 palliatives by the NDDC.

“It was not N1.5bn please. The figure is shown clearly. It is N1.32bn,” he argued. The lawmakers also asked from which budget it was taken.

While the lawmakers insisted that Pondei specified the budget, the NDDC boss insisted on providing his response later.

He also said the commission was preparing to pay students on scholarship.

Responding to another question, Pondei said the IMC had so far received about N72bn.

The committee also asked him about another N641m paid to a contractor, Clear Point Communications and if it was budgeted for in 2019.

Pondei said, “This money was part of the N2.5bn that was for the forensic audit in the 2019 budget, out of which N1.2bn was approved. Out of that, N318bn was approved for the lead forensic auditors, and only a small percentage has been paid out before the budget expired on the 31st (of May).”

Forty-five minutes into his presentation, a lawmaker, Mr Enwo Igariwey, asked Pondei whether the money being spent by the NDDC was budgeted for.

Igariwey asked the MD where the commission would get money to pay students on scholarship since the operation of the 2019 budget ended on May 31 and the 2020 budget had yet to be approved.

While Pondei was trying to answer the question, another lawmaker, Mr Wole Oke, said the MD was not looking fine.

Oke had barely finished speaking when Pondei collapsed where he was sitting and he was carried by security agents and his aides out of the Conference Room 231, venue of the hearing.

At 1:02pm, the committee went on a one-hour break after the NDDC boss collapsed. When the lawmakers resumed, the Speaker, Femi Gbajabiamila, asked the panel to adopt Pondei’s written presentation.

Akpabio, who was interrogated on the committee’s resumption, accused members of the National Assembly of taking most of the NDDC’s contracts.

Defending the huge of expenses of the commission during the pandemic lockdown, Akpabio said, “We cannot close down the Niger Delta because of the security implication in the region. We cannot close down the NDDC because of the fact that we are doing forensic audit. The NDDC plays a vital role in ensuring the peace and security of the region, and 90 per cent or more of the resources of the country, on a monthly basis, comes from there. If you close it in totality, all you will have will be chaos.

“It is important that people who have gone to court, people who genuinely did jobs should be paid for their jobs. For me, I am not against it. Who are even the greatest beneficiaries? It is you people. If you look at your chairman, your chairman…”

While the deputy chairman of the committee interrupted Akpabio, another lawmaker, Goodhead Boma, asked the minister to name the beneficiaries among the lawmakers.

Akpabio said, “Are you asking me the beneficiaries in the National Assembly? I just told you that we have records to show that most of the contracts in the NDDC are given to members of the National Assembly but you (Boma) don’t know about it. The two chairmen (Senate and House) can explain to you. I was a member of the NDDC committee. I know what was going on.”

Responding, Boma said, “You were a member of the NDDC committee in the 8th Assembly. Are you telling me that a lot of jobs were awarded to you as a member?”

While Ereyitomi made efforts to stop Akpabio, the minister continued, “That is why we have to change the modus operandi. You must not allow the two chairmen to hijack the budget every year. You are like me. I was a member like you. I did not know what was going on.”

Koko, however, insisted that Akpabio should state whether Tunji-Ojo was awarded contracts or not.

Responding, the minister said it was not Tunji-Ojo because he was not even a member of the House then.

A member of the committee, Mr Kolade Akinjo, asked why Akpabio recommended Cairo Ojuogboh, a medical doctor, to handle projects of the NDDC, against Section 12(1)(a) of the NDDC Act. He asked, “How do you reconcile a person who is a medical doctor to become an Executive Director of Projects?”

Responding, the minister said, “You are asking of the qualification for the office of the executive director. I agree with you. That person should be somebody who is vast in project execution. The greatest project today in the world is medical, and that is COVID-19.”

The lawmakers, however, disagreed with the claim. A member, Goodhead Boma, asked if there was pandemic when Ojuogboh was appointed.

Koko said, “I listened to you very attentively through all your submissions. But I just want to tell you: You came here to mislead the parliament and you are under oath. That is what you have done deliberately. I have my argument and it should be in line with Section 20 of the Public Procurement Act. This is your report; this is what you have presented to the committee.

“You said you had no link on any contract between yourself and the NDDC, that your job was just to supervise. But correspondences show that they are giving you approvals for forensic auditors, between you and the BPP.”

Akpabio denied various allegations against him, especially by a former acting MD of the NDDC, Joi Nunieh.

Akpabio also said the immediate past Chief of Staff to the President, the late Abba Kyari, sacked Nunieh from the IMC over alleged insubordination and lack of certificates.

He said, “It is just that we don’t want to scandalise anybody. What we did was to expand the interim management and replace the then managing director, when we saw these flaws. But I pointed out on television that she was relieved of her appointment not because of anything but because of insubordination.

“My permanent secretary wrote seven letters to her. Even to attend the Federal Executive Council meeting on the 5th of February to come and give her scorecard, she refused to attend. She felt she was bigger than the minister and her budget was higher than the ministry’s.

“For insubordination, that was the reason she was relieved of her position. However, there were a lot of undercurrents. For instance, we did not want to scandalise her. She even swore to a fake affidavit that she had NYSC (certificate) when she did not have one.”

The minister stated that he had never asked anybody to swear an oath of allegiance to him. “Just for the notice of the committee, I have no presidential ambition,” he stated.

Akpabio also dismissed the claim by Nunieh that the IMC under her leadership spent only N8bn. “The total expenditure before the Pondei committee, that they spent, was about N23bn,” he stated.

The minister also denied asking Nunieh or any member of the IMC for N10bn to be spent as Christmas bonus. “That allegation is false and it is from the pit of hell,” he said.

Meanwhile, protesters clashed at the National Assembly premises earlier in the day.

There was heavy security presence in and around the National Assembly Complex as a result.

While the group supporting the National Assembly probe is Emerging Leaders Forum of Nigeria, the group backing the NDDC and Akpabio against the probe is Niger Delta Development Initiative.

Security operatives had to separate the two groups.

In a related development, a coalition of youth organisations in Nigeria on Monday stormed the popular Unity Fountain in Abuja and held a rally where they called on the Federal Government to intensify the battle against corruption in the country.

During the Anti-Corruption Solidarity Walk, the groups under the aegis of the National Youth Council of Nigeria raised the alarm that some persons were “arm-twisting the government of its patriotic anti-corruption war.”

Meanwhile, the NDDC in a statement by its Director of Corporate Affairs, Charles Odili, said Pondei had been sick for two weeks.

Odili said, “The commission wishes to disclose that Prof Pondei has been ill for the past two weeks. This morning, his condition deteriorated, and his doctors advised against attending the hearing,” he said.

Wike must hand over Nunieh to us, police insist

The police on Monday renewed their call on the Rivers State Governor, Nyesom Wike, to hand over embattled former acting Managing Director of the Niger Delta Development Commission, Dr. Joi Nunieh, to them.

Recall that Wike had raced to Nunieh’s residence last week at Herbert Macauley Street, GRA to rescue her from a team of policemen who laid siege to arrest her.

Speaking to The PUNCH on Monday, Rivers State Commissioner of Police, Joseph Mukan, said the Inspector-General of Police Monitoring Unit was still on the matter, insisting that the governor should hand over Nunieh to the police chief, Adamu Mohammed, whose monitoring team is investigating the case involving Nunieh.

But in a swift reaction, the State Commissioner for Information and Communications, Paulinus Nsirim, said the police could not be talking of arrest when the matter was in court, urging the security outfit to vacate the court order restraining them from arresting her.