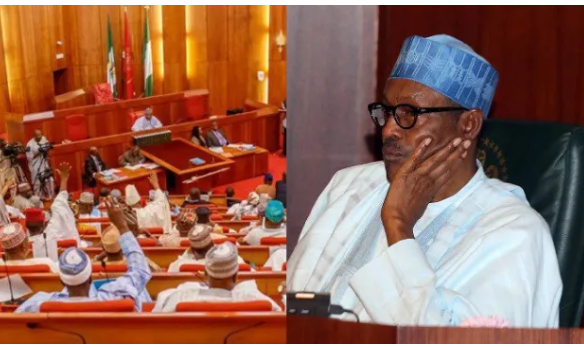 Dr Ahmad Lawan, the Senate President, on Wednesday urged President Muhammadu Buhari to ensure that the 2021 budget is sent to the National Assembly before the end of September this year.

Lawan stated this while referring the 2021-2023 Medium Term Expenditure Framework and Fiscal Strategy Paper to the relevant committees of the Senate for necessary legislative action.

The Senate president also mandated the various committee members to engage all the revenue-generating committees very well to smoothen the passage of the MTEF.

It would be recalled that President Buhari had forwarded the 2021-2023 Medium Term Expenditure Framework and Fiscal Strategy Paper to the Senate for approval on Tuesday.

The federal government proposed the sum of N12.66trillion as aggregate expenditure for 2021 on a deficit of N5.16trillion to be financed by total loan packages of N4.28trillion .

The proposals, as contained in the 2021- 2023 MTEF) and FSP, targets N481.41billion as statutory transfers , N5.75trillion as recurrent expenditure, N3.33trillion for capital expenditure and N3.12 trillion for debt servicing .“According to the documents, critical parameters and assumptions upon which the proposals are based as contained in the documents acknowledged by the President of the Senate , Ahmad Lawan , are $40 as oil price benchmark, 1.86million barrels as oil production per day , N360 to US dollar as exchange rate etc.

Also included are N500billion intervention fund against COVID-19 pandemic , N52billion for Public Works Programme , N32.46billion for Social Intervention Programme , N5billion as bail out for the Aviation sector, N60billion for maintenance of roads through direct labour across the six geo- political zones etc.

In the proposal, aside from the N4.28trillion, the FG, as proposed in the documents, targets the sums of N205.15billion from privatization proceeds to fund the budget.