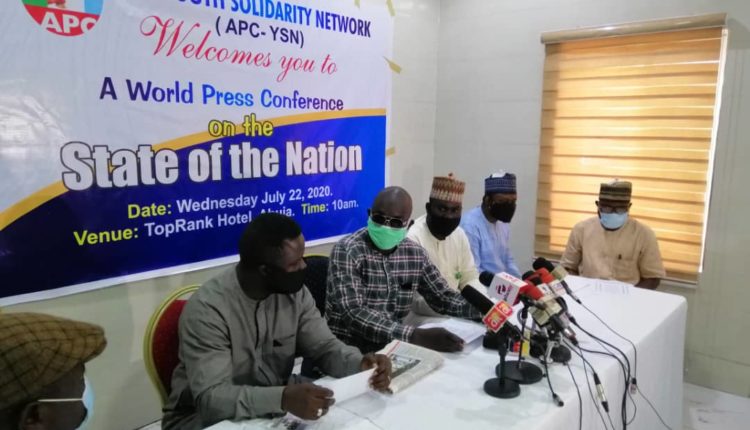 The APC Youth Solidarity Network APC-YSF) has described as senseless and shadow-chasing the Tuesday’s call by the Senate for the resignation of the current Service Chiefs.

The youth group said the resolution made by the Senate following the motion moved by Senator Ali Ndume, is a clear indication that the lawmakers and other stakeholders in the Northeast and Northwest have declined the necessary support to the President and Service Chiefs in the fight against Boko Haram/ISWAP, armed banditry, kidnapping and other crimes bedeviling some parts of the country.

Addressing newsmen on Wednesday, Comrade Danesi Momoh, on behalf of the youth group advised the National Assembly to concentrate on its constitutional duties and desist from “the excitement of interfering with the lawfully defined responsibilities of the executive arm of government.”

The group, therefore, commended the Service Chiefs and Nigerian troops for the wonderful job in curtailing insecurity threats to Nigeria from armed bandits and terrorists.

Full text of his speech below.

The APC Youth Solidarity Network (APC-Youth Solidarity Network welcomes you to this urgent press conference. It is necessitated by the imperative to publicly caution the Nigerian Senate on the persistent and organized campaigns by the national parliament, against the Service Chiefs and President Muhammadu Buhari, GCFR, evident in the frivolous and vexatious resolutions calling for the resignation of the current Security Chiefs.

We recall that during the Senate plenary of July 21, 2020 and based on a motion raised by Sen. Ali Ndume, with additional prayers by Senator Francis Fadahunsi and contributions of other lawmakers, the Red Chamber again unconscionably passed a resolution asking the Service Chiefs to resign over alleged ambush of soldiers in Katsina and the voluntary resignation of many soldiers of the Nigerian Army.

We find the resolution of the Senate ludicrous, senseless, shadow-chasing, embarrassing and incongruent with the reality of the issue of Service Chiefs who are doing their best to curb the resurgent spate of insecurities in some parts the country. There is every reason to frown at this baseless inclination of the Senate.

If the Senate cannot eulogize the efforts and sacrifices of the Service Chiefs who are fighting acts of insurgencies and other criminals in the country, silence is more golden. But it constitutes a slap on the face to call for their resignation or sack and a glaring attempt to overheat the polity.

Asking the Service Chiefs to step-aside is the least solution to the insecurities assailing the country. Besides, it baffles and belittles the Senate, an otherwise honourable parliament to officialize rumours of alleged ambush of soldiers in Katsina state and the purported resignation of soldiers of the Nigerian Army to pass a resolution. It is tantamount to putting the cart before the horse. When has the Senate morphed into a chamber of rumour-mill?

It is increasingly worrisome that the Nigerian Senate, in alliance with some opposition elements have made the calls for the resignation of the Service Chiefs or their sack by President Buhari a hubby. This penchant is absurd and irrational, especially if interrogated from the point of truth.

It is clear the Senate and other stakeholders in the Northeast and Northwest have declined the necessary support to the President and Service Chiefs in the fight against Boko Haram/ISWAP, armed banditry, kidnapping and other crimes bedeviling some parts of the country. And they have ignored extending support unpretentiously.

About a fortnight ago, the Senate President, Sen. Ahmed Lawan and the House of Representatives Speaker, Hon. Femi Gbajabiamila promised Nigerians after a close-door meeting with President Buhari of making provision for additional support to the Nigerian Military which is battling acts of insurgencies and allied crimes in the country. But thereafter, no effort has been made. Is the resolution for resignation the support the National Assembly leadership promised?

However, the outburst by the Senate is a plain admission of their knowledge of the underfunding and lack of motivation of members of the Nigerian Military to place them in a better position for combats against armed bandits and terrorists disrupting the peace and security of Nigeria.

And it is painful to realize that the same Senate which vehemently refused to respond to pleas by the leadership of the Nigerian Army for improved and adequate budgetary votes in the 2020 Appropriation Act for the Army, which is involved in multiple Internal Security (IS) operations, should delight in passing a resolution for the resignation of Service Chiefs or even contemplate to raise a voice calling for their sack. This is the irritatingly barefaced hypocrisy exhibited by some of our leaders and it is condemnable in every facet.

The Senate is peopled with respected leaders from both the Northeast and Northwest. But shockingly, none of them has done anything or even willing to support President Buhari, his government or the military in any way to win the war against insurgencies. Therefore, we cannot discern the obsession of the same leaders with calls for the resignation or sack of Service Chiefs, instead of recognizing and appreciating the much they are doing over the insecurity situation in Nigeria.

What is noticeable or what we have seen is the display of dirty politics by leaders of the Northeast and Northwest, especially those in the National Assembly. This is a resentful display of drunken politics and over- politicization of Nigeria’s insecurity dilemma.

The APC-Youth Solidarity Network completely aligns with the position of the Presidency over the Senate’s latest resolution on resignation of Service Chiefs. The excited Senators are again reminded that the removal or otherwise of Nigeria’s security chiefs is the exclusive prerogative and discretion of President Buhari. A dozen resolutions of the parliament are impotent in contents and action over the issue of Service Chiefs.

The National Assembly is hereby advised to concentrate on its constitutional duties and desist from the excitement of interfering with the lawfully defined responsibilities of the Executive arm of government.

We wholeheartedly commend the Service Chiefs and Nigerian troops for the wonderful job in curtailing insecurity threats to Nigeria from armed bandits and terrorists. We encourage our troops never to relent hence we are confident of their capacity to crush all armed criminal gangs amassed against the people of Nigeria insofar as the nation is under the leadership of President Buhari.