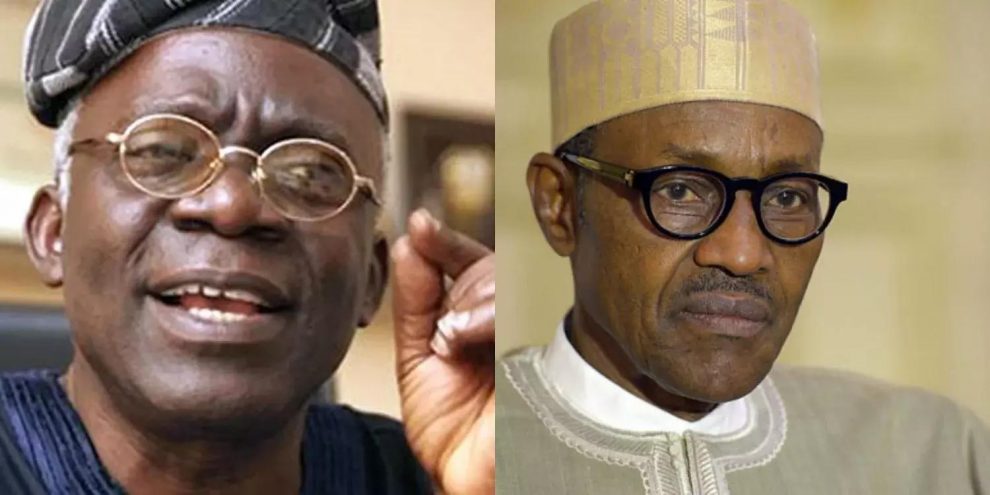 The Alliance for Surviving COVID-19 and Beyond (ASCAB), has been condemned by the Progressive Yoruba Youths for accusing the Federal Government of been incapable of deal with the violence in the North.

Human Right Lawyer, Femi Falana, SAN, is the Chairman of the group which was ahead of May 1.

ASCAB in a statement released had noted that the federal government has failed to link the increase in Coronavirus to the failure of the effective public health system, the absence of social security and health insurance for the masses, while governments had no preference for provision of the essentials of life like housing and food security.

The youth group while reacting to the statement noted that the comment of the Lawyer is discouraging and does not speak well of a man who claims to be a pro-Nigerian.

The Progressive Yoruba Youths, in a statement by its President, Kola Salau, therefore, asked Femi Falana to put his acts together and face his legal practice, rather than being the jack of all trades, and the master of none.

The statement added, “The Progressive Yoruba Youths is aware that Femi Falana is as ignoble as the group he presides over, and it is naturally expected that Nigeria should view any statement signed by Femi Falana with a pinch of salt.”

“It is no longer news that his stock in trade is to seek attention by issuing press statements that are in most cases, a gimmick to curry patronage from clients.”

“The Progressive Yoruba Youths wishes to inform members of the general public that Femi Falana speaks from both sides of his mouth and in most instances, his ultimate goal is for the attainment of his monetary gains.”

“We also wish to state that if the above is not the case, there is no moral justification for Femi Falana to attempt to discredit the efforts of the federal government in addressing the security issues in Northern Nigeria, when the same Femi Falana has been rendering legal services to militant groups in Northern Nigeria such as the Islamic Movement of Nigeria (IMN).

“The pecuniary gains attained by Femi Falana for representing IMN in court are indeed a lucrative one such that his sense of reasoning was blinded when he described the proscription of IMN as immoral and illegal.”

“The Progressive Yoruba Youths wishes to advise members of the general public to be cautious whenever Femi Falana contributes to issues of national concern as most times it is not in the best interest of the country.”

“The Progressive Yoruba Youths wishes to use this medium to caution Femi Falana to be guided with his utterances and desist from playing the devil’s advocate in this critical point of our existence.”

“It is expected that at this stage, Femi Falana must display decorum in his conduct and postulations of government policies and other areas of national concern. This is also not the time to play to the gallery.”