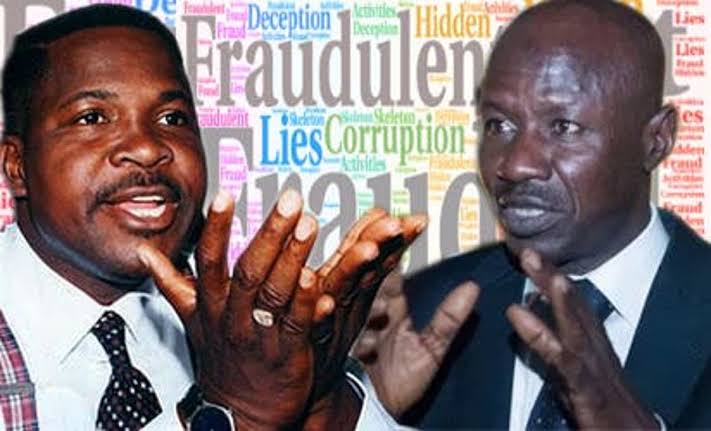 The senior advocate also made recommendations to the panel on the need for the EFCC to be more professional and engage less in “media trial.”

According to The PUNCH, a prominent lawyer, Chief Mike Ozekhome (SAN), on Tuesday, appeared before the Justice Ayo Salami-led panel to testify against the suspended acting Chairman of the Economic and Financial Crimes Commission, Ibrahim Magu, and submitted six exhibits, including two video clips and some documents.

During the session, which lasted about two hours, Ozekhome spoke about the alleged leadership failures of Magu and the investigative deficiencies of the anti-graft agency.

The senior advocate also made recommendations to the panel on the need for the EFCC to be more professional and engage less in “media trial.”

Reacting to the development, however, a lawyer to Magu, Mr Tosin Ojaomo, said he was aware of the senior advocate’s visit to the panel.

Ojaomo said it was unfortunate that Ozekhome, who had publicly lambasted the leadership of the EFCC and Magu, could be invited by the panel, while his client had not been given the opportunity to defend himself.

The lawyer said it seemed the panel was on a “fishing expedition” and was seeking to nail Magu at all cost, hence the decision to invite people, who had grievances with the suspended EFCC boss.

He said, “We are aware of the visit of Chief Ozekhome. His grouse is the freezing of his account in 2017, which was later unfrozen. Unfortunately, it only goes on to show that the panel is on a fishing expedition, because the panel is also inviting people, who have a score to settle with Magu.

“This is not how panels are supposed to act. We all remember how the Justice Oputa panel conducted itself professionally many years ago. People, who were invited, were given petitions ahead of time so that they could defend themselves. Till date, Magu has not received any petition. Is this fair?”

Ozekhome, who confirmed his visit to the panel, told The PUNCH that he was invited to make certain recommendations, which he did.

He said his primary aim was not to settle scores with Magu, but to address the deficiencies in the EFCC with a view to helping it to actualise its core mandate.

The senior advocate said he submitted six exhibits to the panel, including two videos as well as a letter he wrote to the then acting President, Prof. Yemi Osinbajo, on the urgent need for reforms and accountability as regards recovered loot.

Ozekhome stated, “I have not even said anything about the seizure of my funds by the EFCC and I am surprised that Ojaomo, a lawyer, can talk about something he didn’t witness. My N75m was seized by Magu and his goons despite the fact that it was my legal fees. I went to court and defeated them; so, I have nothing to prove.

“All I did at the panel was to tender some documents and some CDs, which contained videos. One of them is a video where I was given a standing ovation at an event where I advised Magu on how to fight corruption. It was about telling them not to do a one-sided anti-graft war, where you arrest activists and leave those in government.

“I also tendered a letter dated May 2017, which I wrote to the then acting President, Prof. Yemi Osinbajo. In the letter, I raised 12 questions as to where the recovered loot and property were and if the property had been sold, to who and for how much. Tell Ojaomo to relax and that I have not yet started.”

READ  Priests And Herbalists Storm The Streets Of Benin Kingdom To Wage War On Kidnappers, Cultist
Share this Post[?]