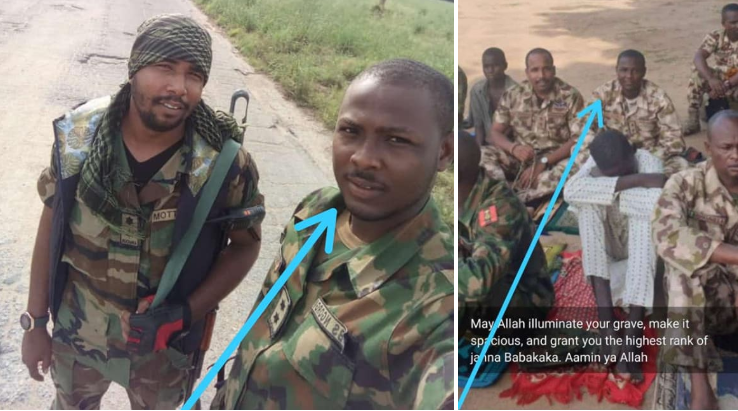 A newly married military officer identified as Lieutenant Babakaka Shehu Ngorgi of the 202 Battalion was reportedly shot dead by a soldier of the same battalion in Bama, Borno state following a misunderstanding.

It is not yet clear why the soldier killed Lt Ngorgi, who is his senior in the army, but sources say Lt Ngorgi who until his death was the battalion’s adjutant responsible for administrative matters had refused to give a pass to his attacker, who had earlier requested one to go see his family.

The yet to be identified soldier had requested a pass to visit his family over an urgent matter, and when he was turned down on Wednesday, he fired six shots at the lieutenant who was talking to his wife Hauwa on the phone.

After shooting him, the attacker was reportedly heard screaming, “I have achieved my aim.”

“The soldier joined the army in the 2016 intake and had since been deployed to fight Boko Haram in the north-east. This time, he had been in duty post for almost 12 months and he wanted that pass by all means,” a military source in Bama told newsmen.

“Normally, you apply for a pass by filling the form and then you submit to the adjutant who is the battalion administrative officer. It is the adjutant that will now make recommendations and forward to the commanding officer for approval.

“The soldier was denied the pass by the adjutant, and that was when he got angry and decided to kill him. He opened 36 rounds on the officer, killing him instantly.”

Another source said the soldier was due for a pass having spent more than the required three months which makes him eligible.

“You can apply for a pass after three months, but the problem we have in this operation is that the superiors will be telling you that we don’t have enough manpower. So, a lot of soldiers are always denied pass,” he said.

He added that the pass is only given when the soldier has to attend to critical matters like loss of parents or loved ones.

A military commander had on Tuesday also admitted that they have limited manpower to fight.

When contacted, Sagir Musa, army’s spokesperson, said he would get on the matter and share details at an appropriate time.