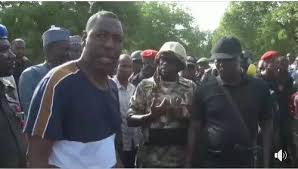 The attack on the convoy of Borno state governor, Babagana Zulum was a clear indication that the service chiefs were no longer capable of handling the security situation in the country and needs to step aside, the Minority Caucus in the House of Representatives disclosed.

Recall that Governor Zulum’s convoy was attacked by gunmen on Tuesday on his way to Baga, a commercial town in Kukawa Local Government Area to distribute relief materials to internally displaced persons for Sallah.

Reacting to the attack on Zulum’s convoy, the Minority Leader of the House, Hon. Ndudi Elumelu said in a statement that the attack by suspected bandits has again reinforced the urgent need to review the nation’s security architecture by sending the service chiefs packing to pave way for the appointment of new ones.

This is coming after northern governors condemned the attack on Governor Zulum, describing it as callous and reprehensible.

Recall that Governor Zulum had accused the military of complicity in the attack on his convoy by bandits suspected to be members of the Boko Haram insurgents.

Elumelu, in his statement, asked President Muhammadu Buhari to immediately implement the recent resolution of both chambers of the National Assembly asking him to sack his service chiefs.

He said the attack on the Borno State governor and other dastardly activities of the insurgents in various parts of the country have further reinforced the urgent need to inject new hands with fresh ideas to handle the nation’s security.

Elumelu said: “The worsening security situation in the country under the current service chiefs has reached an unbearable state to the extent that insurgents have the temerity to attack an armed convoy of a state governor.

“This is more so with the insistence by Governor Zulum on compromising of security system in the area, allegedly creating opening to the attack; a position that validates the call for immediate reorganising of the nation’s security architecture.

“The entire nation is distressed by the incessant mindless killing of our citizens and pillaging of defenseless communities by insurgents, bandits and kidnappers, which have brought indescribable agony, anguish and torment to innocent Nigerians.

“We the opposition lawmakers hereby in the strongest terms restate the call to President Muhammadu Buhari to honour the resolution of the National Assembly and immediately remove the service chiefs and bring in new hands to effectively confront the security challenges confronting our nation.”

Also condemning the attack on Governor Zulum’s convoy in a statement issued by its Chairman and governor of Plateau State, Simon Bako Lalong, the Northern Governors’ Forum described it as another desperate attempt by criminal elements to sabotage the efforts of the governor towards reducing the suffering of vulnerable people who have been traumatised by terrorists.

Governor Lalong said: “This regrettable attack shows the desperation by enemies of peace and humanity at large to jeopardise all efforts towards making life easier for victims of violence in the state over the years.

“The Northern Governors Forum strongly condemns this attack and stands with Governor Zulum who has demonstrated courage in personally reaching out to people in need despite the dangers.

“We urge him not to deter as he keeps working with security agencies to protect the lives and properties of the people.”