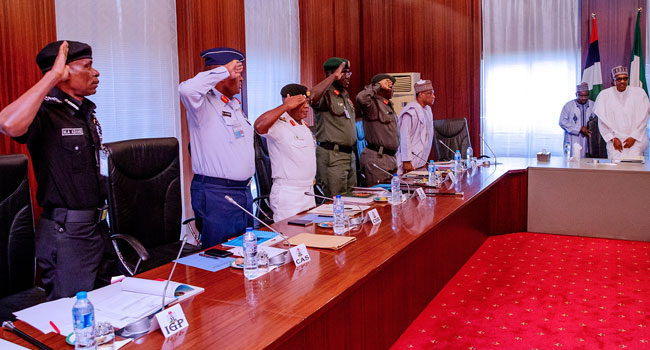 Those in attendance include Vice President Yemi Osinbajo; the Chief of Staff to the President, Prof. Ibrahim Gambari and the Secretary to the Government of the Federation, Mr Boss Mustapha.

Others are the Service Chiefs led by the Chief of Defence Staff, General Gabriel Olonisakin; the Chief of Army Staff, Lieutenant General Tukur Buratai,; the Chief of Naval Staff, Vice Admiral Ibok Ekwe Ibas and the Chief of Air Staff, Air Marshal Sadique Abubakar as well as the National Security Adviser to the President Maj.-Gen. Babagana Monguno.

Some cabinet Ministers in attendance of the meeting include the Attorney-General of the Federation and Minister of Justice, Abubakar Malami; Rauf Aregbesola (Interior); Bashir Magashi (Defence); Muhammad Dingyadi (Police Affairs) and Minister of State, Foreign Affairs, Amb. Zubairu Dada.