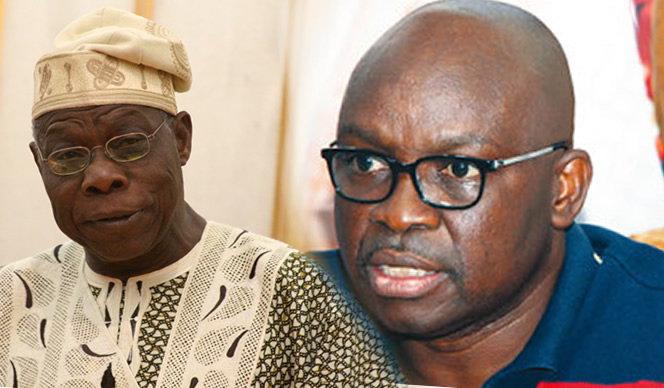 This is coming barely 24 hours after WITHIN NIGERIA reported that former president, Olusegun Obasanjo has forwarded a letter titled ‘Letter of condolence’ to the family of former governorship candidate of the Peoples Democratic Party in 2019 election in Ogun State, Senator Buruji Kashamu.

In a statement released by Kehinde Akinyemi, the spokesman to the former president, Obasanjo said Kashamu was able to manoeuvre laws and politics of the society on alleged crime in and outside of Nigeria but couldn’t avoid death.

Reacting to the statement, Fayose in his condolence message on twitter described Obasanjo’s statement as regrettable.

According to him: “I also condemn the statement made by former President Obasanjo on his (Kashamu) death.

“It is regrettable that Obasanjo could say what he said about Buruji Kashamu after his death and when he can no longer question him. Why didn’t he say that when Kashamu was alive?”

He further asked if Obasanjo “can say in good conscience that he did not at some points collaborated with Kashamu and most of the things he (Kashamu) did politically were not with his collaboration?

“Nigerians will watch out for Obasanjo’s own end. He should stop forming saint because he is not. He should also remember that his own end will come too and nobody knows how the end will be.”