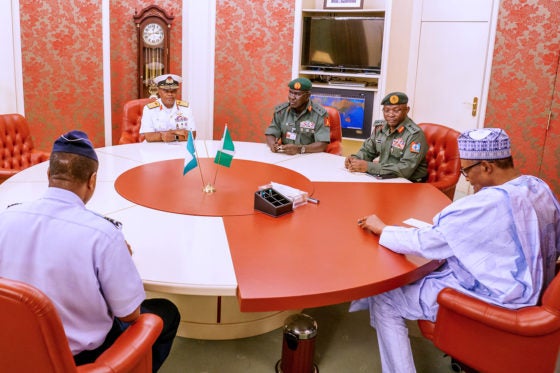 A prominent traditional ruler in the Southeast, Igwe Friday Imoko of Effium, in Ebonyi State, has described President Muhammadu Buhari and the current set of Service Chiefs as the best for the country.

The Traditional Ruler said while speaking with newsmen at Abakaliki during the launch of the Nigerian Army Reference Hospital, that if one is to go by uninformed comments about the fight against insecurity in Nigeria, one may be misled into thinking that the President and the military are not doing enough.

The Igwe cautioned against what he described as herd mentality in the assesment of the ongoing bid to address the security challenges in Nigeria stating that what is being reported in most media houses does not capture the reality on ground.

He said from the close interaction he has had with the military recently, he has been able to do his own assesment of the situation and has come to appreciate the much the military is doing to address all the security challenges facing the country.

“If you go by the herd mentality, you will think that the service chiefs are just sitting down and doing nothing and you may try to justify calls for their removal.

“But if you’re privileged to observe as I’ve done lately, the efforts of the military at a close range, then you’ll come to understand what is happening and the level of sacrifice by the military,” he stated.

The Igwe said from what he has observed of the military of recent, that they are committed not just to ward off external aggression, but are ready to defend the territorial integrity of the nation as well as collaborate with the civil authority to check other forms of crime.

He described the current set of service chiefs as the best the country has had saying the success of troops over banditry and insurgency is a reflection of the professional sophistication of the army.

He said, “The Nigerian military has never been tasked to this extent since independence. They are all over the country either fighting to defend the territorial integrity of Nigeria or enforce peace or fight criminals.

“They are in the Niger Delta, the Southwest, Southeast, Northcentral, Northwest and Northeast at the same time”

He said apart from the insurgency in the Northeast, there are other challenges like banditry, terrorism, kidnapping, cattle rustling and communal clashes that the military is dealing with that Nigerians should appreciate.

The Igwe particularly commended the Chief of Army Staff, Lt. General Tukur Yusuf Buratai for going to the Northeast to stay in the trenches with troops saying that is a sign of good leadership.

He said, “I am surprised that the army could still find time and embark on projects for communities like the Army Reference Hospital in Abakaliki which they’re building.

The Igwe blasted those who have continued to say negative things about the country and the military saying they do not mean well for the country adding it is high time people begin to appreciate the President’s commitment towards making Nigeria a peaceful and secured place to live in.

READ  Passenger plane with more than 100 on board crashes in Karachi, Pakistani authorities say (PHOTOS)

Igwe Imoko , said he and many traditional rulers had come to Abakaliki to thank the Chief of Army Staff for considering Abakaliki for the good work he is doing on security and for the siting of the Army Reference Hospital in Abakaliki.

He said though they did not meet the army chief in person but were still happy with the kind gesture and prayed for the good health and wellbeing of Buratai and the other sevice chiefs.

The Chief of Army Staff was represented at the occasion which held in Abakaliki last week.

The Army Reference Hospital is expected to serve the host community as well as the entire Southeast in the provision of medical health services.