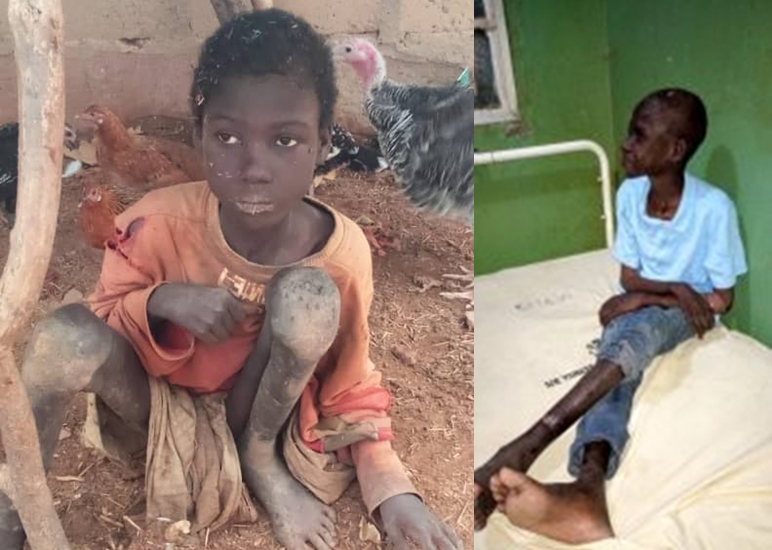 A father and his three wives have all been arrested by Kebbi State Police Command for allegedly chaining 11-year-old son in an animal stall for two years in their house.

The Public Relations Officer(PPRO) of the command, DSP Nafi’u Abubakar, confirmed this to newsmen in Birnin Kebbi on Monday.

He said: “Yes our men have arrested a father to an 11-year-old, Jibrin Aliyu, and three wives for allegedly chaining the boy for over two years.

“Our men arrested the suspects on Sunday in Badariya area of Birnin Kebbi Local Government, and the boy is at Sir Yahaya Memorial Hospital as the investigation is till on going to unravel the circumstances behind chaining the boy in animal stall for that period,” Abubakar said.

While speaking with newsmen, an elder brother to the victim, Bilal Aliyu, who denied chaining the boy, said that the boy was temporary chained for fear of being missing from the house because he is epileptic from the birth.

“My brother whom we happen to be same father with was epileptic right from when he was born, but periodically recovers from his ailment upon which was the reason why he was sent to school and until his situation got worsen was in primary school two.

“After my father got separated with his mother (the boy), his mother had taken him to her patents village with a view to stay with her, and it was when his ailment bounced back and became worth that our father took him back as his mother eventually died.

“I can tell you, our father went to a great length to ensure that my brother got the best treatment he deserved as it took him to the extent of selling out his house and car in the course of the treatment, and unfortunately to no avail,” he said.

Aliyu claimed that the boy was only chained on daylight and taken to his room in the evening,saying the process was not more than one year.

Earlier, the Ward Head of the area, Alhaji Muhammad Attahiru, said that he was not aware of chaining the boy in the house.

“In spite of my untireless effort in making sure that the area remains peaceful , and I was not aware of the incident until when the suspects were arrested.

“I had been coming to the frontage of the house to settle their matrimonial disputes as the man has three wives, but what baffles me I had never heard any information of a child being chained or abandoned in the house.

“The boy, when taken, was seeing emaciated, dehydrated and partially deformed because of prolonged detention and chaining as well as starvation, ” he said.

Attahiru urged the residents to report any suspicious move or person to the appropriate authority for further action.

Shortly after visiting the boy at the hospital, the Special Adviser to Governor Abubakar Atiku Bagudu on Women Affairs, Hajiya Zara’u Wali, described the development as unfortunate and shocking.

She said that the state government would not relent in its efforts to ensure that all the necessary needs of the victim would be taken cared of.

“Now the boy is in the hospital and responding to treatment courtesy of the state government under the able leadership of Gov. Atiku Bagudu,” she said.

She warned that any parents who committed similar act would not be condoned by the government while calling on parents to take of their wards’ responsibilities.