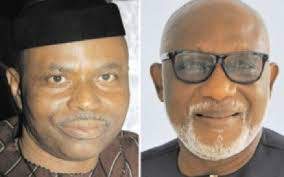 The Executive Governor of Ondo State, Oluwarotimi Akeredolu on Thursday has renewed his attack on the administration of his predecessor, Dr. Olusegun Mimiko.

Akeredolu said the array of abandoned projects initiated by the late Olusegun Agagu, by the Mimiko administration, due to political differences, was a disgrace to governance and a disservice to the people of Ondo South Senatorial District in particular and the entire state at large.

This was disclosed by Ondo State Governor, Akeredolu while speaking at the inauguration of newly completed projects at the Olusegun Agagu University of Science and Technology, Okitipupa (OAUSTECH)

Akeredolu said his administration had completed projects inherited from Mimiko, who he said neglected Agagu’s projects for eight years.

The projects inaugurated were library, auditorium and administrative building, which were initiated by the late Agagu.

The governor hailed what he described as the great vision of the late Agagu for sincerity of purpose and commitment by making the establishment of the university a reality.

He said he was alarmed about the deplorable condition of things at the institution in terms of infrastructure, workers’ welfare and other essential facilities incidental to a conducive learning environment.