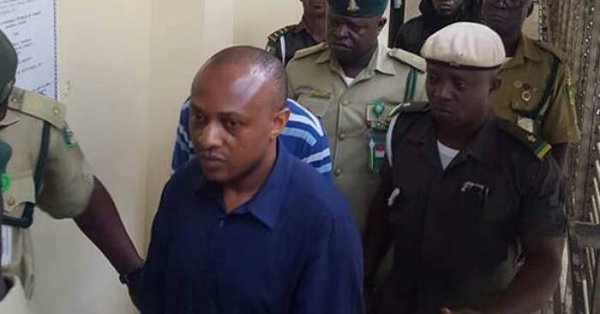 Justice Hakeem Oshodi, the judge presiding over the trial of alleged kidnap kingpin, Chukwudimeme Onwuamadike (alias Evans), before an Ikeja High Court, ordered Evans’s new Counsel to write and sign an undertaking to finish the case after the infamous kidnapper stalled trials over the years while switching Counsels.

Since the trial began on Aug. 30, 2017, Evans has changed lawyers five times. The lawyers who have represented Evans include Mr Olukoya Ogungbeje, Mr Noel Brown and Mr Olanrewaju Ajanaku.

Following the ruling on the no-case submissions, Evans’s new and 5th Counsel, Falabi told the court that his chambers, Victor Okpara and Co. had just been briefed about the case.

Upon hearing Falabi’s law chambers, Oshodi said: “Okpara, your principal once delayed a trial in my court for two years. I will never forget it. You must write an undertaking.”

The judge immediately dictated the wordings for the undertaking and Falabi wrote and signed to ensure that he or the law chambers would not abandon the case.

The wordings of the undertaking are: “I, Oyekunle Falabi, representing the law firm of Victor Okpara, undertakes on behalf of the first defendant (Evans) in suit No. ID/590761, to represent him in defence of this matter at all times when the matter comes up in Justice Oshodi’s Court.

“In the event of any breach of this undertaking, the court is at liberty to report us to our national body, the Nigerian Bar Association (NBA).”

After Falabi wrote the undertaking, Oshodi ordered that the document be witnessed and signed by the Lagos State Solicitor-General, Ms Titilayo Shitta-Bey, who represented the prosecution.

Following the signing of the undertaking by Shitta-Bey, lawyers for Evans’s co-defendants requested an adjournment to prepare for defence.

Responding to the defence counsel’s request for adjournment, Shitta-Bey told the court, “Counsel should take the undertaking seriously.

“Constitutionally, they are guaranteed adequate time to prepare for their defence but not indefinite time.”

Oshodi adjourned the case to Oct. 16 for defence.