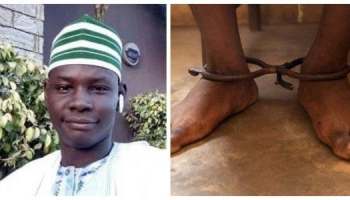 The United States Commission on International Religious Freedom has condemned the blasphemy laws in Nigeria and has faulted the judgment of an Upper Sharia Court in Kano State sentencing a 13-year-old boy, Umar Farouq, to 10 years in prison for making derogatory statements toward Allah in an argument with a friend.

USCIRF an independent, bipartisan Federal Government entity established by the US Congress to monitor, analyse, and report threats to religious freedom abroad, in a statement in reaction to the judgment, the US commission condemned the death sentence handed to Sharif-Aminu for allegedly insulting the Prophet Mohammed.

USCIRF Commissioner, Frederick Davie, stated, “It is unconscionable that Sharif-Aminu is facing a death sentence merely for expressing his beliefs artistically through music. The US Senate should work swiftly to pass Resolution 458, which calls for the global repeal of heresy, blasphemy, and apostasy laws.”

Meanwhile, the National Coordinator, Human Rights Writers Association of Nigeria, Emmanuel Onwubiko, said the judjement did not conform with human rights conventions and treaties to which Nigeria was a signatory.

The Convener, Coalition in Defence of Democracy and Constitution, Ariyo-Dare Atoye, also said, “What is coming out of Kano is a challenge to section 10 of the 1999 Constitution, as amended. We know that the current Attorney-General of the Federation, Abubakar Malami, is more or less not interested in the secularity of this country.

“What is going on in Kano is an attempt to restructure Nigeria through the back door to create a two-nation in one because the message they are sending to the international community is that there is a part of the country operating a different legal system.”