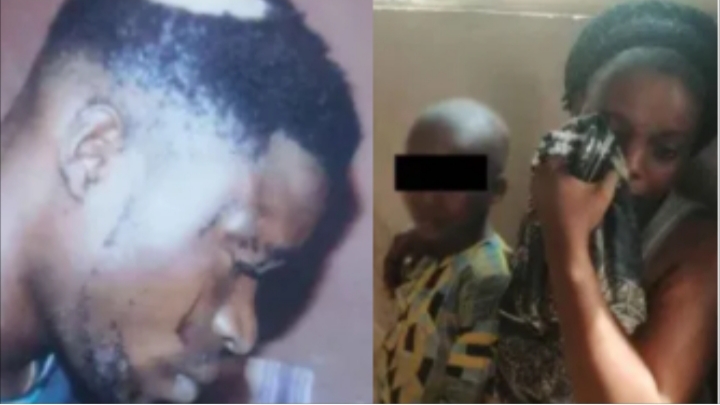 A 25-year-old bereaved wife whose husband was murdered by hoodlums has appealed to Nigeria Police Force to apprehend the killers of her husband.

The wife identified as Aderonke Balogun made the appeal while narrating how her husband identified as Sulaimon Ajayi was rushed to a hospital following an attack on him.

The deceased, Ajayi was later discharged but was admitted again when he developed complications and he died days later in the hospital.

Trouble began when members of Ijegemo-Omilende community in Ado-Odo area of Ogun state woke up to find the mutilated body of a young man who was murdered and some of his body parts carted away by an unknown person.

Recounting what happened, Sulaimon’s younger brother, Dauda Ajayi, who was at the scene of the incident, said: “I was with my brother on the day of the incident.

“A week before the attack, a young man was killed and his body parts removed in the community. So, we had to set up a vigilante to secure the community at night.

“On the night of the attack, at about midnight, we stopped a bike carrying two people to inquire who they are and where they were heading to at that time of the night.

“After we stopped them, we discovered they are resident in the community. But they flared up that we had no right to ask them where they were coming from at that time of the night.

“We were still talking with them when one of them hit me with his hands and we started fighting. My younger brother had to go notify the Oloriebi (family head) of the development.

“When the Oloriebi came out, he implored them to ensure peace and understand that it was the strange times that was responsible for the vigilante.

“While he was still speaking with them, one of them made a call that they were under attack and within a few minutes, over twenty young men with matchets, axe, broken bottles and charms invaded our compound and attacked us.

“We were outnumbered so they dealt with us seriously. They used cutlass that was laced with charm to matchet Sulaimon on his head while they hit my head with wood that has nails.”

Wife of the deceased, Aderonke Balogun,25, said: “I was inside sleeping when my husband was attacked, he was rushed to the hospital for treatment. They refused to attend to him till we got police report. He was admitted for three days and discharged.

“Two days after he was discharged, his health began to deteriorate badly, his neck had become stiff, he couldn’t turn his neck left or right, he complained of headache and had begun to feel numb in his legs and arms.

“We had to rush him back to the hospital where doctors and nurses attended to him. He was placed on drip; the drip was still on him when he passed on.

“Immediately his attackers heard that my husband had died, they fled the community.”

The mother-of-two added: “See how they have turned me into a widow at 25 and made my children fatherless. I have no power of my own but, I am pleading with the state government to intervene. I plead with the police to investigate this case and arrest the killers of my husband.”

The case was initially reported at Ado-Odo police station in Ogun State before it was transferred to Elewaran Ogun state police command.