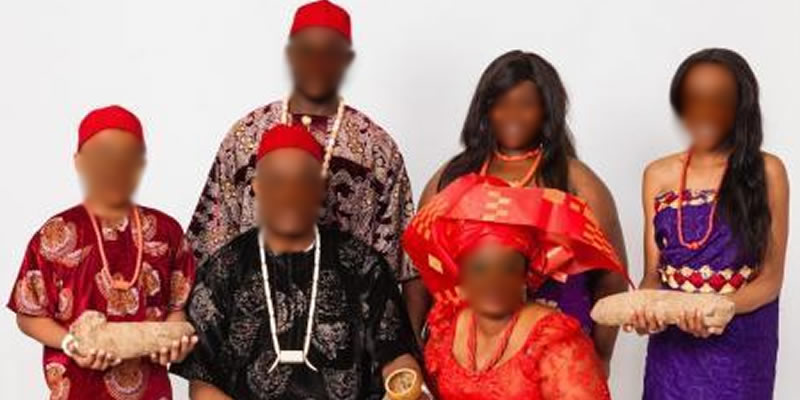 The right of a female child to inherit her father’s properites has been upheld by the Supreme Court.

This new development has caused crisis and divided Igbos as some are in support of the court verdict while some oppose it.

According to Igbo laws and customs, female children are prevented from inheriting their father’s estate specifically land in their father’s ancestral home.

There are arguments from certain quarters that the decision of the supreme court voids this age-long Igbo custom on the grounds that it is discriminatory and conflicts with the provision of the constitution.

The Supreme Court held that the practice conflicted with section 42(1)(a) and (2) of the 1999 Constitution.

Gladys had sued the deceased’s wife and son before the Lagos High Court, claiming to be one of the deceased’s children and sought to be included among those to administer their deceased father’s estate.

The trial court found that she was a daughter to the deceased and that she was qualified to benefit from the estate of their father who died intestate in Lagos in 1981.

The Court of Appeal, Lagos to which Mrs. Lois Ukeje and Enyinnaya Ukeje appealed upheld the decision of the trial court, prompting them to appeal to the Supreme Court.

In its judgment, the Supreme Court held that the Court of Appeal, Lagos was right to have voided the Igbo native law and custom that disinherit female children.

Justice Bode Rhodes-Vivour, who read the lead judgment, held that: “No matter the circumstances of the birth of a female child, such a child is entitled to an inheritance from her late father’s estate.

Justice Rhodes-Vivour said: “Consequently, the Igbo customary law, which disentitles a female child from partaking in the sharing of her deceased father’s estate is breach of Section 42(1) and (2) of the Constitution, a fundamental rights provision guaranteed to every Nigerian.

“The said discriminatory customary law is void as it conflicts with Section 42(1) and (2) of the Constitution. In the light of all that I have been saying, the appeal is dismissed. In the spirit of reconciliation, parties are to bear their own costs.”

Justices Walter Samuel Nkanu Onnoghen, Clara Bata Ogunbiyi, Kumai Bayang Aka’ahs and John Inyang Okoro, who were part of the panel that heard the appeal, agreed with the lead judgment.

The decision has evoked mixed reactions from Igbos.

In his reaction, the Bishop, Diocese on the Niger, Anglican Communion, Rt. Rev. Owen Nwokolo described the judgment as a welcome development.

According to report, he said that female children are not second class citizens and should not be treated like one.

He said: “Female children have and should be accorded the same rights given to their male counterparts and therefore should not be discriminated against.

“Families should put the judgment in practice and female children should stand up and claim their right. It is not only Supreme Court judgment but God given right and they should take that right.”

Prof. Uzodinma Nwala-led Alaigbo Development Foundation, ADF, also welcomed the decision, saying, “In today’s world, daughters have proved their mettle in bringing sustainability, honour and dignity to their families. Some of them have played the role of bread-winners for their father’s houses.

“So, it would have amounted to great injustice to continue to deny them the right of inheritance. They should be entitled to a fair share of their family wealth whether married or single.”

However, a prominent monarch in Nsukka and the grand patron of Enugu State Traditional Rulers Council, and the traditional ruler of Aji autonomous community in Igbo-Eze North Local Government Area of Enugu State, Igwe Simeon Osisi Itodo, said the Supreme Court ruling cannot abolish the tradition and custom of the Igbos.

READ  Nigerians reacts to these photo of Mercy Aigbe with another actor on a movie set. (PHOTOS)

Itodo said that any attempt to implement such law in Igboland would provoke chaos and skirmishes among various communities.

He argued that the custom is unique to the people of South-East Nigeria and should not be touched.

“There are traditions which had existed before the law. Before the emergence of law courts, Igbos have their tradition and custom which cannot be wiped out because of Supreme Court ruling.

“There are so many things we have in common which cannot be stopped because of court verdict.

“We are not against that ruling but we would not abolish our customs and traditions which all of us met. You can imagine a married woman coming back to her father to share his property with the sons.

“We would not allow it because it would breed chaos and troubles in our communities. If there are customs that allow such inheritance, let the people continue the practice but it won’t work in Igboland.

“In India, women pay the dowry but the reverse is the case here. We would not abolish our unique customs because of court ruling,” the monarch said.

The President- General of Ndigbo United Forum, NUF, Chief Godson Ezenagu, commended the decision of the Supreme Court, saying that granting females access to their fathers’ property is natural, adding that it would give them a sense of belonging in the society.

“According to Igbo tradition, the female child inheritance does not happen and now that the Supreme Court has ruled that they are entitled to that, by natural justice and conscience, I agree with them completely.

“Granting them access to their biological father’s properties is a natural thing. Sometimes, customs handed over from generation to generation can be awkward and can be discontinued.

“For denying them that, they are put in serious jeopardy; they are molested at home and also in their marital home. Their partaking in sharing of property will make them more comfortable than the situation in which they found themselves. That is what is supposed to happen naturally.

“All animals are equal and at the same time, all children are equal. We shouldn’t because of custom deny the female child her natural right.

“So, it is a welcome development and I am sure all people of good faith will support it and advocate that even the ones that have not been done or already done could be revisited.”

Chief Augustine Emelobe, a renowned Chemical Engineer, said the Supreme Court’s ruling has removed the unjust and unfair treatment on the female children.

He told newsmen: “I support the verdict of the Supreme Court. Children are children irrespective of whether they are male or female. I have always had the notion that it is unjust and unfair on the part of the female children.

“I applaud the Supreme Court as the last hope of the common man in this age-long man’s inhumanity to man.”

For the President-General of the Coalition of South-East Youth Leaders, Goodluck Egwu Ibem, the Supreme Court decision is a welcome development.

According to him, it is a wonderful defence of the girl-child who before now, has been treated as a second class citizen in our society.

He said: “She is seen as the property of her husband who loses all forms of rights once she gets married. A man who has only female children in our society loses his rights to certain privileges like being a traditional ruler or his inheritance in his own father’s compound. The situation before now has been very ugly.

“We deeply appreciate the Supreme Court for this landmark judgment that has brought back the confidence of the girl-child in our society today.”