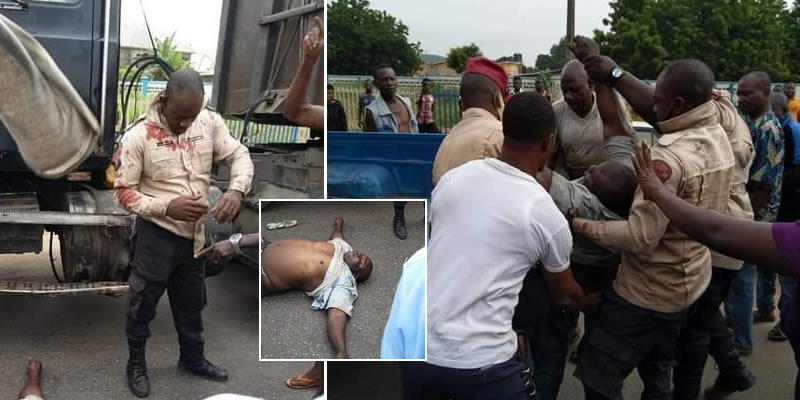 An officer of the Federal Road Safety Corps, Delta State Command, Mr C. U. Mgbede, narrowly escaped death by whisker on Thursday after an angry mob pounced on him after accusing him of pushing a truck driver out of a moving vehicle on the Benin-Asaba Expressway, Asaba.

Mgbede jumped into the truck and allegedly pushed down the driver on a tarred road after efforts to take over the steering failed.

Narrating the incident that angered residents, eyewitnesses disclosed that the driver was gasping for breathe after he landed on the tarred road, and the situation attracted the mob who pounced on the officer.

The officer survived the attack following the swift reaction of members of the FRSC response team, who rescued him from the claws of the mob, and rushed him to the to the Federal Medical Centre (FMC), Asaba, along with the truck driver.

See photos from the scene of incident below; Reacting to the incident, Sector Command of FRSC in the state, Mr. Alphonsus Godwin denied that the officer pushed the truck driver out the steering.

“The man was asked to stop at the checkpoint because he was not with seatbelt, rather than stopping, he moved ahead and the marshal jumped into the vehicle and took the control of the steering.

“He stop the vehicle immediately and trying to arrest the driver in a bid to impound the vechicle when the mob stormed the scene and beat the officer blue and black.

“Before our response team arrived the scene, they have brutalized the officer. They carried the two of them who were lying on the ground to FMC, Asaba. This is one of the challenges we are having in the job when vehicle owners are trying to resist arrest,” he said.