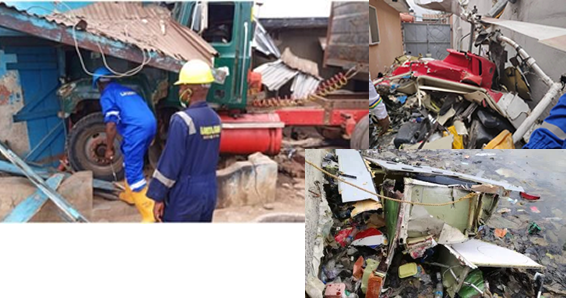 A helicopter on Friday crashed into a building at Opebi area, off Salvation Road, Ikeja Lagos State.

The Lagos State Emergency Management Agency (LASEMA) had said rescuers on their way to the scene.

Public Relations Officer of the LASEMA, Nosa Okunbor, said: “Yes, it just happened. The helicopter crashed in Opebi around 12pm.

“LASEMA operatives are on our way to the incident site. I’ll give you more updates.”

It reports that latest update indicates two occupants of the ill-fated helicopter were recovered dead while another has been hospitalised following the aftereffect of the crash.

The hospitalised victim is in the Intensive Care Unit of the Lagos State University Teaching Hospital while the bodies have been deposited at the morgue.

”The helicopter was carrying three passengers; one is in the intensive care unit at the Lagos State University Teaching Hospital while the bodies of the two killed on impact have been deposited in the mortuary. We are on top of challenges especially crowd control while operation is ongoing,” Dr Olufemi Oke-Osanyintolu LASEMA DG confirmed