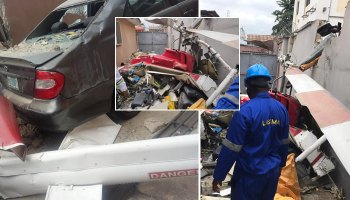 An inhabitant of Opebi street in Lagos has condemned the lack of compassion and sympathy by some Lagosians towards accident victims after witnessing the helicopter crash yesterday.

The  tragedy struck at a busy Neighborhood in Lagos State after a Chopper crashed into a residential building at 16A Salvation Opebi Road, at Ikeja area of the State on Friday, 28th August.

The resident simply identified as John told newsmen that first responders, who rushed to the scene stole victims’ mobile phones and cash.

I lost my phone while trying to rescue them, the eyewitness added.

He further stated that “It’s so bad we could do this to ourselves, some people rushed here pretending as if they were helping us to bring out the bodies of those involved in the accident only for them to steal their phones and money. Even my phone was taken away, I gave it to someone while trying to rescue them but the person ran away with it.”

John added that the helicopter hovered several times around the area before crashing into the building.