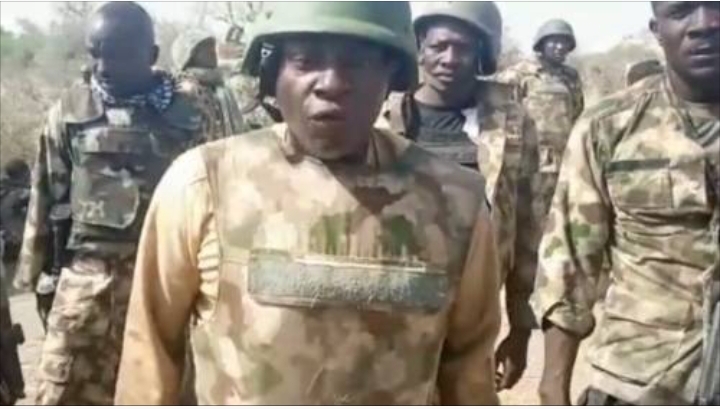 The mother of a missing soldier identified as Rabi Obanla has requested the Nigerian Army to release her son if he is still alive or show her corpse if he had been killed.

The missing soldier with the rank of private identified as Tokunbo Charles Obanla had not been seen since the video he shared went viral.

A former commander, Operation Lafiya Dole, Major General Olusegun Adeniyi in the viral video was complaining about how the soldiers fighting Boko Haram in the North-East lacked weapons to fight the insurgents.

The private soldier, Tokunbo who shot the video of the distraught soldiers overpowered by superior weapons of Boko Haram had been kept in a cell by the army authorities at FIB, Shehu Musa Yar’Adua Barack where he had been subjected to untold hardship.

According to SaharaReporters, General Adeniyi who instructed Tokunbo to record his message to the chief of army staff has been redeployed to the Nigerian Army Resource Centre Abuja as a senior research fellow while Tokunbo had been in detention.

Reacting to the detention of the private soldier, Tokunbo’s mother, Rabi Obanla told SaharaReporters that she had not spoken with him since March after the viral video.

She asked the army authorities to allow her to see her son, but if he had been killed, she should be shown the corpse as proof.

She said Tokunbo’s father, her husband, had been ill and currently in a hospital, adding that her blood pressure had gone very high due to the anxiety about her son.

“Since March, I have not heard from my son. I don’t know where the

The Nigerian army is keeping my son; I don’t know if he is alive or not, and I have not seen his dead body,” she said.

“As I am, to eat is a problem,” Mrs Obanla continued. “Thinking has killed me already. They don’t sell children in the market. If they don’t want him to keep working with them, they should return him to me. I will go and buy a motorcycle for him to ride and make some money.”

She said she contacted General Adeniyi, who ordered her son to shoot the video.

“Before my son went into battle, he gave me the contact of his commander, General Adeniyi. I called him, and he refused to pick the call. I sent him a text message, and he said I should pray for my son. He said it is only prayers I can offer my son. What type of statement is that? Since then, he has refused to reply to any of my messages.”

According to Mrs Obanla, Tokunbo’s detention without trial has unsettled the family.

“Everyone in the family is tired. Right now, my husband is in hospital, he can’t talk, and he can’t speak. I am in God’s hands. I haven’t seen my son. My son is a young man. He is just 21 with four years of service.”

Mrs Obanla said she lived in Maimalari Barrack in Maiduguri in Borno State where she gave birth to her four children.

She said her husband was a soldier and retired from the service last year, adding that she was disappointed by how the army had been treating children of veterans.

“The Nigerian army is using our children like rats. If not, because there is no money, I wouldn’t allow my son to join the Nigerian army,” Mrs Obanla said.

SaharaReporters reached out to the army spokesperson Sagir Musa for a comment, but he has yet to respond to text messages as of press time.