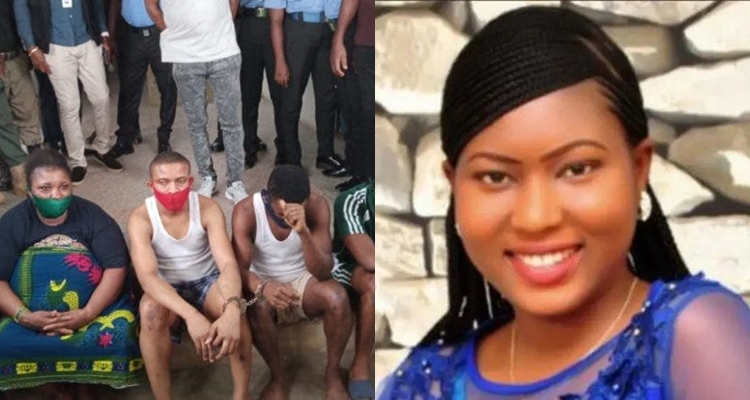 Following the parading of the six persons believed to have been directly and remotely connected to the killing of a 100 Level Microbiology student of the University of Benin, Mary Uwaila Omozuwa, inside a church, months ago, one of the suspects has revealed how the murder was carried out.

The late Uwaila, who was 22 years old at the time of her death was purportedly gang-raped, beaten, inflicted head injuries on her and abandoned for dead.

She died three days after the attack at the University of Benin Teaching Hospital (UBTH). It was gathered that for five years, Uwaila, had been using the hall of the Redeemed Christian Church of God situated at Osa-Amadasun Street, Ohovbe Quarters which she attended to study as the church was about five minutes walk from her residence.

While parading the suspects, the Commissioner of Police, Johnson Kokumo identified them as Nelson Ogbebor ‘m’(27); Tina Samuel ‘f’ (45); Collins Uligbe ‘m’ (24); Mary Ade ‘f’ (45); Valentine Akato ‘ m’ and Nosa Osabohien ‘m’(31) Mrs Mary Ade was alleged to have sponsored the killing for unknown reason which she has however denied while Mrs Tina Samuel was alleged to be shielding her son, Lucky who was also said to be part of the killing but now on the run.

He narrated how he used the fire extinguisher to hit her after the other suspects engaged her and he named Akhator Valentine and Neslon Ogbebor as members of the gang. Osabohien said: “I repair phones at Agbor park and I bought a phone from Collins.

On that fateful day, May 27th, he brought a phone to me for sale, we bargained and I paid him N17,000. By Monday or Tuesday the following week, I was tracked and arrested.” Narrating how the girl was killed, Collins Uligbe said: “Five of us entered the church. I was outside watching if anybody was coming, Neslon, Azubike and Lucky who ran away had monitored whether anybody was in the church.

“They then carried a 2 by 4 wood, beckoned on me to come and we all entered the church the same time. I now engaged the girl while Nelson hit her with the wood on her neck.

“The girl fell, scattered the table and the books she was reading, I now rushed towards her and as she was about to get up, I hit her with the fire extinguisher. But the truth is that we did not rape the girl. On her part, the alleged sponsor of the killing, Mrs Mary Ade said “they lied against me, first they alleged that I gave them one million naira to kill her because they claimed I said everybody liked Uwaila and didn’t like my daughter.

“They changed the story again to say I asked them to kill her so that my store would become very big. I am waiting for the matter to be taken to court because I know nothing about the killing and the issue of N1 million or N1.5 million” Another accused, Tina Samuel said she had not seen her son for over five months and was not shielding him.

“I don’t know where he was, I was in the village in Nikorogha in Edo state, where I stayed to sell clothes while my son stayed in Benin. “I just saw some policemen who said the commissioner of police wanted to see me and I followed them. When I got here, they asked me where my son was but I had not seen my son, as I was not based in Benin.

“That was how I was taken to Abuja. It was in Benin I was now told that my son was among the people who killed the girl. Lucky is a stylist and I have not seen him for more than five months now.” The Commissioner of Police a Special squad from Abuja was deployed by the Inspector General of Police, Muhammed Adamu who joined the team in the state to carry-out the investigation.

He told reporters that, “the matter was a great concern to the Inspector General of Police, IGP, Muhammed Adamu who sent to us here in Benin, Homicide experts to work with our policemen at the state criminal investigation department. “What we are seeing today, is a result of the efforts of the police to get at the root of the crime and today, I announce to you and make public that the perpetrators have been arrested. “The postmortem results had actually confirmed that she was raped. I assured the people of Edo state that we would leave no stone unturned to unravel the mystery behind this.

“These criminals went into the church building to rape and gruesomely murdered her. The perpetrators have been arrested. The investigation has been painstaking and we have a total of six suspects.” He said they would be charged to court soon.