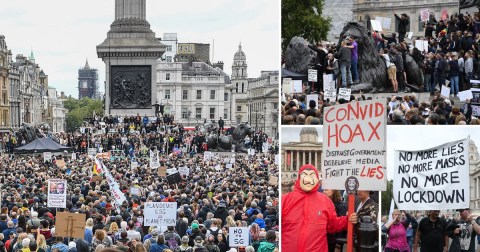 Several demonstrations took place across Europe over the weekend to protest mask wearing and other measures to curb the spread of coronavirus.

The largest rally took place in Berlin, with close to 40,000 protestors and which resulted in some 300 arrests after violence broke out between extreme demonstrators and police.

According to Berlin Minister of Interior Andreas Geisel, around 200 of them were arrested in front of the Russian embassy, ​​after having thrown stones and bottles at police. There were no casualties reported.

In the evening, a group also crossed barriers around the Reichstag, which houses the German parliament, before being pushed back by police, according to an AFP photographer.

The event, named the “feast of freedom and peace” by the organisers was the second of its kind in a month and worries the authorities.

Berlin authorities had initially banned the demonstration from taking place for “public health reasons,” referring to the difficulty to enforce social distancing between between demonstrators. But the decision was overturn by an administrative court.