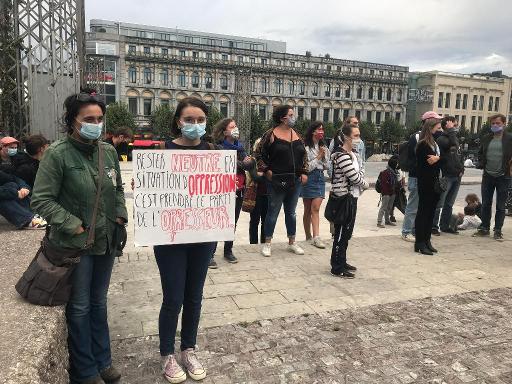 About 50 persons took part in a protest against racism and police brutality organised by the Campagne Solidarity movement on Friday at the Saint-Lambert Square in Liège.

The event, held under the theme of “Stop Deadly Racism and Police Brutality,” took place from 6.30 to 7.30 p.m. After an address by a member of Campagne Solidarity, followed by the reading of testimonies of brutal acts by police, activists chanted slogans against racism.

Campagne Solidarity member Jérémiah David said the group organised the gathering hurriedly “in reaction to the police brutality and the Nazi salute that occurred at Charleroi Airport.”

The protest came two days after the publication, on Wednesday, of a 2018 video of a policeman sitting on a Slovak man at the airport, while another officer made an apparent Nazi salute.

“It’s important to react to such events, because indifference would only increase the acceptability threshold,” David stressed.

Campagne Solidarity was launched in July in Liège by the Parti socialiste de lutte (PSL). It said it planned to organise other actions of this nature soon.