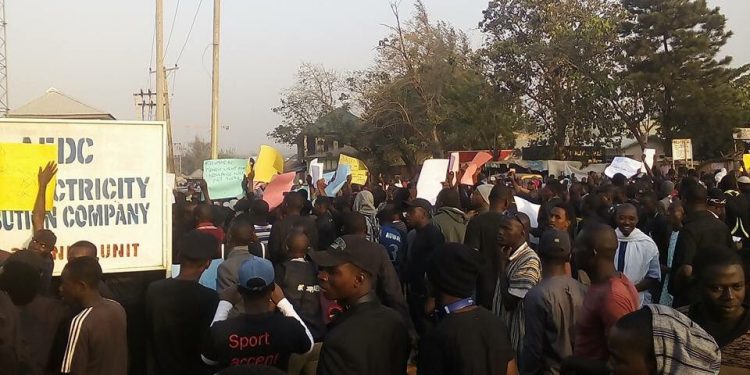 Youths of Kpakungun area of Minna on Monday morning blocked one of the major roads in Minna, the Niger state capital to protest incessant power supply to the state capital.

The outraged youths also sent away the Secretary to the Niger State Government (SSG), Alhaji Ahmed Matane, who appealed to them to open up the roads and stop the protest.

They demanded Governor Abubakar Sani –Bello should show up to address them.

The youths declared they were tired of the epileptic power supply, saying the Abuja Electricity Distribution Company (AEDC) was taking residents for granted.

The Kpakungun road is the only road that leads to the Southern parts of the country and one of the most used in the state.

Motorists, especially those traveling to the south, are still stranded at the area.

Efforts of the State Government to bring the protest to an end failed as the SSG hurriedly left amid boos and chants.

One of the Councillors representing Minna South Ward, Aminu Ladan, told reporters that was zero response from the authorities, saying the protest was peaceful and responsible.

“As you can see, the SSG was driven away in anger and the message he brought could not be passed. My people are demanding for the presence of the Governor.

“As a political office holder, I understand that the SSG is a representative of the Governor but the people do not understand that. They are not convinced and they want the governor to come himself,” he said.

The youths vowed to close the road for 24 hours until the Governor shows up.