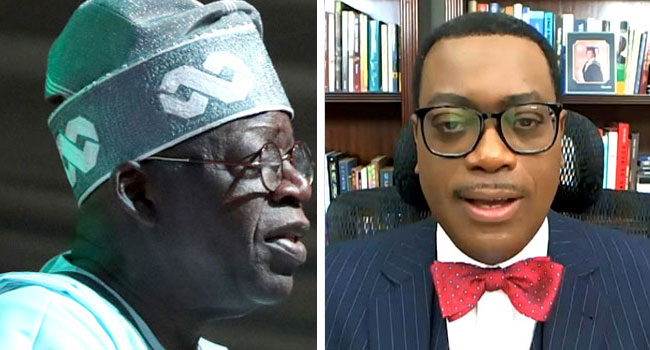 National Leader of the All Progressives Congress, APC, Bola Tinubu, has congratulated Nigeria’s former Minister of Agriculture, Dr Akinwunmi Adesina, on his re-election as the President of African Development Bank, AfDB.

He said Adesina’s re-election for another term of five years was an affirmation of Africa’s confidence in his ability and commitment to the development of the continent.

Adesina was re-elected on Thursday last week by the Board of Governors of the AfDB Group at its 2020 Annual Meetings in Abidjan, the capital of Cote D’Ivoire.

In a passionate letter forwarded to Adesina at the weekend and personally signed by him, Asiwaju Tinubu said: “By way of this letter, please accept my heartfelt congratulations over your election to serve a second five-year as President, African Development Bank at the recent 2020 Annual Meetings of the AfDB Group.

“Your unanimous re-election by the Board of Governors, coming after ill-defined attempts to block your continuance, shows that if we remain vigilant and true to the collective purpose of the economic progress of the African continent, then fairness and justice will win out in the end.”

Tinubu described Adesina as a globally renowned economist who has demonstrated outstanding competence and professionalism during his first term, adding that his re-election was an affirmation of Africa’s confidence in his ability and commitment.

According to him, the AfDB president distinguished himself in his first term by driving to reshape the bank to be a more active catalyst for Africa’s development.

The APC leader noted that Adesina focused on five development priorities known as the High 5s – Light Up and Power Africa, Feed Africa, Industrialise Africa, Integrate Africa, and Improve the Quality of Life for the People of Africa.

READ  Adesina Sworn In For Second Term As AfDB President

He said: “As AfDB President for another term, I urge you to continue in like manner. Continue to invest your cognitive abilities, immense skills, and robust energy in the development of Africa.

“Given the exigencies of the present moment due to the global pandemic, you must put your knowledge and creativity into fullest use that we work towards creating more employment for the people of this continent and remove them from the grip of poverty and its attendant difficulties.

“The AfDB must be at the policy and intellectual vanguard as we seek ways to contain both the public health and economic challenges of COVID-19.

“For your re-election, we must also congratulate and applaud President Muhammadu Buhari and other present and past leaders in Africa who believed in you and worked assiduously for your success.

“This victory is not only yours, the AfDB group or Nigeria’s, it is victory for Africa itself. The continent deserves that our best and most able minds be able to serve and work for its betterment.

“I wish you an even more successful second term. May God be with you and may He help and guide you in the struggle against poverty and in our efforts to bring much-needed development to our continent and its people. Please rest assured of my highest regards always.”