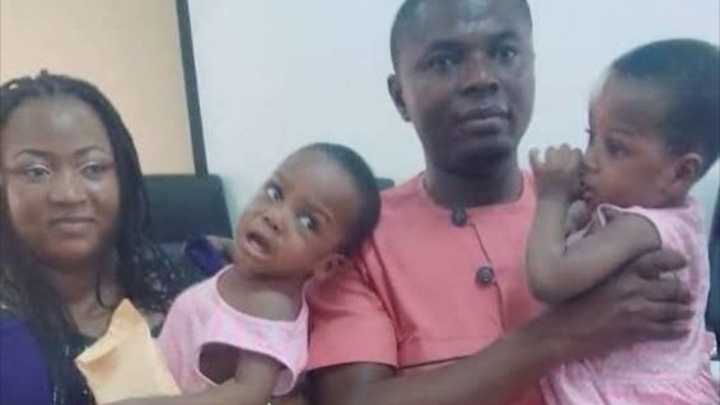 The sum of N1 million has been donated by the Bayelsa State Deputy Governor Lawrence Ewhrudjakpo for the upkeep of Grace and Mercy Ayebaiyeni, the seperated conjoined twins.

While receiving them at the state’s airport yesterday, Bayelsa deputy governor disclosed that the N1m was his contribution to their upkeep pending a reception by Governor Duoye Diri.

Ewhrudjakpo said Grace and Mercy were the first to be successfully separated in Southsouth.

Ewhrudjakpo promised to cater for the upkeep and total education of Mercy, who shares a name with his mother and wife.

Speaking on the development, the Chief Medical Director of Federal Medical Centre (FMC) at Yenagoa, Dr Dennis Alagoa said the surgery was performed at FMC at Yola in Adamawa State.

He said paediatric surgeons and health experts from both centres collaborated to achieve the feat, while Nigerian Air Force provided logistics for travel.

“Grace and Mercy were delivered through Caesarean Section on December 12, 2019, at the General Hospital, Nembe, Bayelsa, and subsequently referred to us at the FMC in Yenagoa. The twins were successfully separated on August 10, 2020.

“They were cared for at the Special Baby Care Unit and they were joined at the stomach in the liver. We evaluated the situation and in the best interest of the babies opted to collaborate with FMC Yola where a successful surgery was conducted. Our surgeons and the lead surgeon at FMC in Yola carried out the task.

“…surgery lasted for less than three hours and recovery was fast and smooth. By the next day, they were already eating.

“We hail the Chief of Air Staff, Air Marshal Sadique Abubakar, for his intervention by providing the aircraft and logistics for medical evacuation of the babies, their parents and medical team.

“…surgery running into several millions was done free, in addition to the welfare of everyone involved in the process.”

Lead surgeon, Prof. Auwal Mohammed Abubakar stated that the twins shared one liver before they were separated.

Chief Medical Director of Federal Medical Centre at Yola, Abubakar said Grace and Mercy did not share any other organ besides liver.

He said the nature of their joining made surgery easier, with the lesser time of three hours.

The children’s mother, Ayebaekipreye Ebinyefa, thanked the hospitals for the surgery.

According to her, the successful operation saved her from being ridiculed and tagged a witch.

“While the operation lasted, I was scared and praying for its success. Before we went for the operation in Yola, I received insults and was tagged a witch. Some said the children came out conjoined because of my stubbornness and witchcraft.

“While the operation was on, I prayed fervently because I could not receive such wicked names and lose the children. I had faith in God and told Him to take control. I appreciate our benefactor, Gabriel Jonah. He was the God-sent used to save me from death because without his intervention during delivery, we would have been killed.

“He took us from Nembe to Yenagoa and eventually connected everyone involved with this surgery. In the last eight months, he has fed us and taken care of us…”