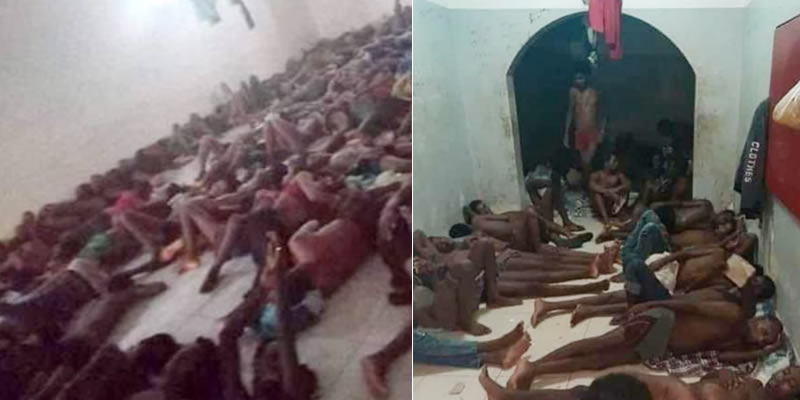 A recent investigation has exposed multiple Saudi Arabia’s hellish Covid Detention Centres where African Migrants are are maltreated as images and testimonies have sparked outrage among human rights activists.

According investigation by The Sunday Telegraph, African migrants are locked in heinous conditions as part of a drive to stop the spread of Covid-19.

Images sent via phone by migrants held inside the detention centres show dozens of emaciated men crippled by the Arabian heat lying shirtless in tightly packed rows in small rooms with barred windows.

“Plenty of inmates are suicidal or suffering from mental illnesses as a result of living this for five months,” said one Migrant. African Migrants jam-packed in one of the detention centres, sleeping like sardine fishes
[Img. crdt: Telegraph] Dozens of emaciated men crippled by the Arabian heat inside one of Saudi Arabia’s detention centres [Img. crdt. Telegraph] The migrants, Abebe said “It’s hell in here. We are treated like animals and beaten every day,”
“If I see that there is no escape, I will take my own life. Others have already,” he added via an intermediary who was able to communicate on a smuggled phone.

“My only crime is leaving my country in search of a better life. But they beat us with whips and electric cords as if we were murderers.”

Reacting to the situation, Adam Coogle, deputy director of Human Rights Watch in the Middle East, after being shown the images by The Sunday Telegraph, said “Photos emerging from detention centres in southern Saudi Arabia show that authorities there are subjecting Horn of Africa migrants to squalid, crowded, and dehumanising conditions with no regard for their safety or dignity,”