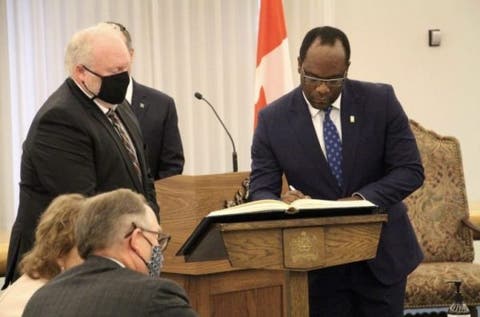 After becoming the first African to be appointed Minister of Justice in the Canadian province, Kaycee Madu, a Nigerian lawyer newly-appointed as Solicitor-General for the Government of Alberta, has said he looks forward to a day when appointments are based on hard work and merit in Nigeria.

President Buhari, while congratulating the Nigeria-born Canadian minister, he described the honour as “landmark and historic,” saying it once again presents people of Nigerian descent as go-getters, who distinguish themselves in different walks of life.

Reacting to President Muhammadu Buhari, Atiku Abubakar, and other Nigerians’ congratulatory messages following his new appointment, Madu said “Thank you for all the support and prayers coming from Nigeria and Nigerians in the Diaspora”,

“I look forward to the day when Nigeria and Africa become places where hard work and merit are rewarded. Chukwu Gozie! #ableg #cdnpoli,” Madu posted on twitter.

Before his appointment, he was a member of the legislative assembly of the province representing the district of Edmonton South-West after winning the 2019 Alberta general election.

On April 30, 2019, he was appointed to the Executive Council of Alberta as the Minister of Municipal Affairs.

In a tweet on Sunday evening, Madu thanked Nigerians, who celebrated his appointment.