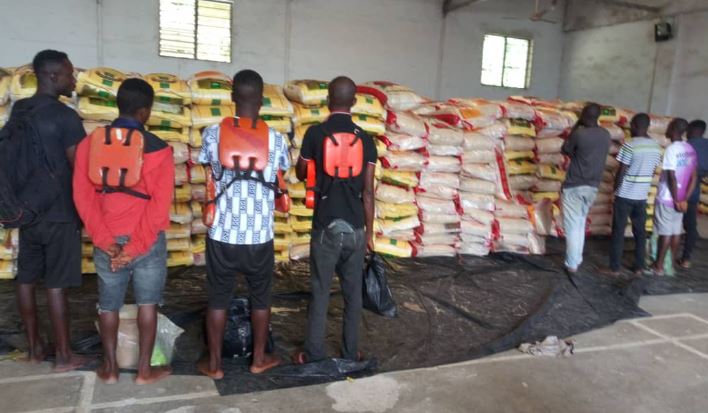 The suspects were arrested for smuggling 1,522 bags of foreign bags of rice in Calabar.

Eight suspected foreign rice smugglers have been apprehended by the Nigerian Navy Ship (NNS) in Calabar.

Among the suspects arrested for smuggling 1,522 bags of foreign bags of rice is a 16-year-old boy. Commander of NNS Victory, Commodore Idi Abbas said the suspects were arrested in two batches.

Abbas told newsmen that the confiscated items and eight suspects will be handed over to the Team Leader of Operation Border Drill for further investigations and prosecution.

“We have been up and doing as part of our patrol effort not only to check smuggling but also curb all forms of criminality within our waterways.

“We are aware that most times when kidnapping is carried out, the fastest way for them to escape is through the creeks, so we have placed our boats at vantage positions that you cannot go into the sea without being seen.

“We all know that times are hard but no matter how hard times are, there are other ways of earning a living legitimately.”

Receiving the suspects and items, Superintendent of the Nigerian Customs Service, Chuks Ofilli said the procedure of the service was to take the items confiscated to the government ware house. He said that the suspects would be handed over to the legal unit.