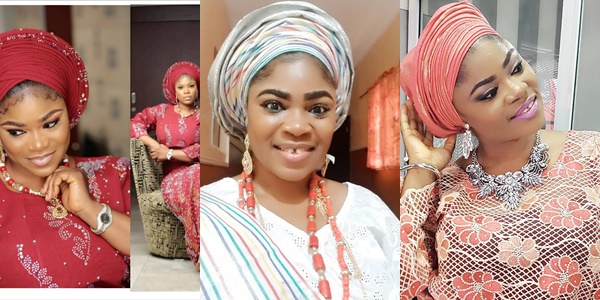 Nollywood actress, Eniola Ajao recently was the subject of discourse on Instagram, following her support for BBNaija Lockdown housemates, Erica and Kiddwaya.

The popular Yoruba actress and producer spoke in an interview with The Nation spoke on why she’s supporting the reality TV show stars, marriage, and acting.

SO, what prompted your decision to watch BBNaija this season?

As an actress and entertainer, I have always been a fan of the BBNaija reality show, watching it every year without missing any episode of the show. Though I have never developed an interest or liked anyone in the BBNaija edition, like I have been so passionate about this year’s housemates and interestingly, this year’s edition, I genuinely like someone with interest for the first time on the show.

You identified your interest in Erica and Kiddwaya from the start of the show, what were the things you spotted in them?

Yeah, I loved Erica from the very first day I set my eyes on her on the show, because she is slim, pretty, and adorable with a good character. I have been monitoring her antecedents on the show closely for seven weeks and coupled with the fact that she said her mum is a single mother and she’s the only child of her parents makes me fall in love with her and the rest of the house always been against her, makes me also contribute my support for her. Meanwhile, on Erica’s closest housemate, Kiddwaya, on the other hand, is a lovable guy, free-spirited down-to-earth and he doesn’t brag about his father’s wealth coupled with the fact that he’s Erica’s best friend in the house. That makes me love them both and root for their support from my fans.

Some believe you are rooting for Kiddwaya because of his father’s wealth; can you clear the air on that?

I won’t shy away from your question, though very laughable, but a good question. Supporting Kiddwaya means I’m intentionally doing it for money? Well, the social media users and their shady mindset. I am sure of one thing; people would believe what they want to believe, but for me, I stand for the beauty of the show and what comes with the glee of the business.

Would all these attacks stop you from watching the reality TV show?

Ah…Mr. Gbenga…social media attacks…stop me ke…? That can never happen, I’m a big fan of the show for years, and that cyberbully or attacks can’t stop me or make me feel regretted of the reality show, that can never happen, but remember that, as an actress, social and cyberbully have made the majority of us develop a thick skin.

Would you ever consider auditioning for the reality show?

Ah….brother Gbenga! Ema pa mi ooo (don’t kill me)…se mio ti dagba ju (Am I not too old) auditioning for BBNaija lo ni… I am too old for such a programme even if I’m not, I am not interested.

What have you been up to in recent times?

I have been working at several locations, having stayed at home for months. Work has started fully, and we thank God that we are alive with our loved ones and family. I have been busy with work after the lift of the lockdown caused by the Covid-19 pandemic.

How has it been returning to set?

I’ve been busy with a whole lot of productions and these have kept me very busy, but thank God, we are gradually returning to life.

You act and produce, do you intend to add directing to your abilities?

Yes, by the special grace of Almighty God. Directing, you must know, is not an easy task, because all the loads of production are usually piled on the Director but I still need to enroll in a reputable film academy, either here in Nigeria or abroad, to know all it takes to be a consummate director.

Looking back as an actress, what incident would you say had shaken you to your roots?

Honestly, nothing had shaken me to my roots. I have realized that there is nothing new under the sun, nothing surprises me anymore. I have, over the years, learned to expect anything, good or bad, from human beings.

For you, what’s the memorable part of being famous?

There are tons of memorable parts of being famous. Being famous is as well as being who you are all the time. But when I get kudos for a job well-done in any production, it gives me joy and makes me strive to do better. Isn’t that memorable?

Have you ever considered getting married to any of your colleagues?

I have never considered getting married to any of my colleagues, and to the glory of God, my fiance is not in the entertainment world. So, it’s not possible.

Some actresses believe fame has in a way prevented them from getting married early enough, what do you think?

Marrying early or late is a choice, depending on what the actress wants. I don’t think it’s the fame or career that determines whether you get married early or not. As I said, it’s a matter of individual choice.

Are you open to featuring in English-speaking films?

I have already been featured in one before, and by the special grace of Almighty God, I will feature in many more if the scripts come and are worth it.

What are the challenges of being a movie producer?

It has not been easy. Let me say capital wise you know you have to source for money, source for people who will help you handle the jobs because you cannot do it alone. I will just say I am in the right place and a good hand. Whenever I want to produce my job, my boss always gives me time which is always okay for me because I know he brings the best out of the job. I’m not always in a rush to do anything. I’m just privileged to be under somebody that is helping me out.

What’s your first movie as a producer?

Daramola, that was my first production,

What were the challenge and experiences?

The experience was not good because it was my first time trying to source for money, trying to think of the character, thinking of how to pay the people on set, and their welfare. As a producer, all the casts and crew members are on your neck. So you just have to look out for their well-being.