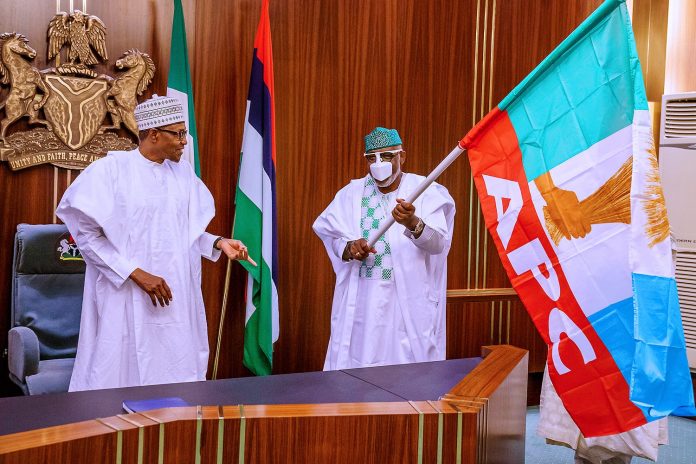 President Muhammadu Buhari Friday urged the governing All Progressives Congress to work diligently towards returning governorship candidate of the party, Rotimi Akeredolu, for a second term in office.

The President, who presented the party’s flag to the candidate at the Presidential Villa, said the reconciliation process in the state branch of the party had provided a solid ground for an easier victory for the candidate than he achieved in his first term.

While assuring Akeredolu of the party’s full support, the President said a peaceful and fair election that reflects the will of the people should be uppermost, urging adherence to the regulations of the Independent National Electoral Commission and protocols of the Nigeria Centre for Disease Control.

Buhari noted that the party’s mechanism for resolving differences was most effective, and would be sustained to strengthen relationships and project the objectives of the party as people-focused and development-oriented.

Speaking with newsmen after he led the delegation, Caretaker Committee Chairman and Governor of Yobe State, Mai Mala Buni, expressed confidence that the ruling party will win the forthcoming election in the state.

He boasted that the APC would emerge victorious in the Ondo election because of Akeredolu’s achievements in his first tenure in the state.

“We are here to present our candidate to Mr. President being the leader of the party for his blessing. That has always been the practice, we cannot kick-start our campaign without his endorsement and that is what we have just done.”

“APC is the only party that can win election in Ondo, not only because APC as a party is the only party but because the governor there is performing and has performed, the people of Ondo state have seen for themselves and have agreed to themselves that yes, he is the only man they can trust for the next four years.

“So, Mr. President has made it and has endorsed him. That’s what we have been looking for, his blessing, his endorsement, his encouragement and his support and we have gotten that already.”

On why he was confident, especially as the opposition political parties have also fielded strong candidates, Buni said the track record of the governor will give the ruling party victory.

He said,”I am optimistic because the product we are selling has sold himself already because he has performed in the last four years. We are all product of our choices and the people of Ondo State are wise now to choose him to continue the good work he is doing.

“So I am very much optimistic that the good people of Ondo State will renew their mandate and the governor of Ondo state will continue and they will give him the mandate again for another four years.”