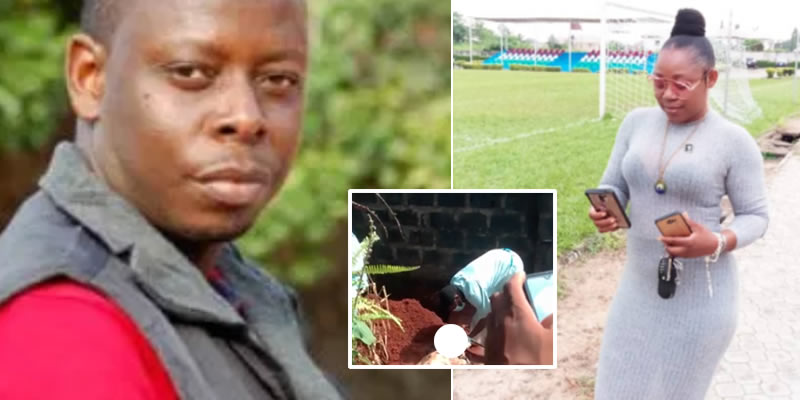 A Nollywood Director identified as Nonso Ekene and a security guard, Mr Isaac Sunday have been arrested by the Police in Delta State over the murder of a 36 years businesswoman, Miss Obiageli Onekanse.

The deceased, a bride-to-be who slated her wedding for December, lived with the two suspects at No. 4 Anene street by the Cenotaph, at the High Court axis of the GRA, Asaba until two weeks ago when she was declared missing. End, however, came to the search of Obiageli after her mysterious disappearance following a tip-off that her security guard was seen driving one of her cars with his wife and children inside. The security guard was seen with her AVALON saloon car at the Rainoil filling station by Summit junction and the person who spotted the vehicle alerted the Sirki who contracted guard for the security job.

Sirki immediately rushed to Summit Junction and saw Sunday with the lady’s car loaded with the security guard’s luggage and called the police who promptly arrested him. The police in the course of their investigation, had visited the deceased compound but did not find anything incriminating, until yesterday when they discovered a place suspected to be a grave.

The body of the 36-year-old businesswoman was discovered in the shallow grave but in suspicious circumstances. Obiageli Onakanse’s corpse was found buried upside down, two weeks after she was declared missing.

The decomposing body had the hands and legs tied, the neck sliced and stab wounds all over her body. DCP Olaleye said the gatekeeper confessed to killing Onakanse and burying her in a shallow grave in the vast compound where she lived.

However, prior to Obiageli’s sudden disappearance, it was gathered, that the late businesswoman was having problems with her co-tenant, a Nollywood producer named Nonso Ekene and had reported same at the GRA Divisional Police Station.

Elder brother of the deceased, Mr Sunday Onekanse, accused the police of complicity in the matter, disclosing that the GRA Division of the Nigerian Police was not ready to arrest the suspected Nollywood Director until the State Commissioner of Police, Mr Hafiz Inuwa intervened.

While calling for justice in the matter, Mr Onekanse insisted that those involved in the killing must be brought to book.

Police said investigation was ongoing on the matter, adding that the motive for the murder was yet to be established.

Meanwhile, this is not the first scandal involving one of the suspect, a Nollywood Director and actor, Nonso Ekene. An up and coming actress as at 2012, Boma Tubonimi Arinyedokiari, also based in Asaba, accused the popular director of extorting the sum of N105,000,00 from her, in addition to threatening to deal with her in the event of her backing out of “a six- year contract which she entered with him,” WITHIN NIGERIA cites from Vanguard’s report 8-years ago.