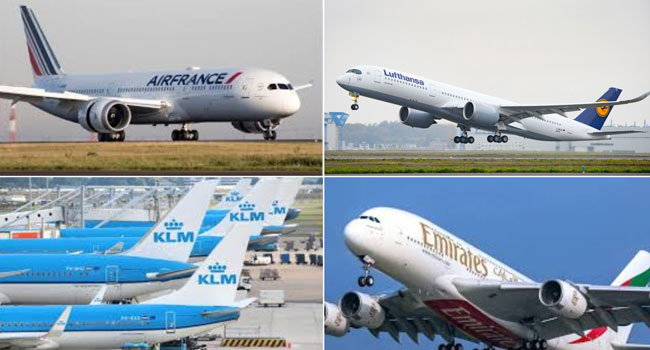 Ahead of Saturday’s resumption of international flights, the Federal Government of Nigeria on Thursday said only approved airlines would be permitted into the Nigeria’s airspace.

The Minister of Aviation, Hadi Sirika, said this at the briefing of the Presidential Task Force on COVID-19, on Thursday, held at the International wing of the Nnamdi Azikiwe International Airport, Abuja.

The government had in March shut the nation’s airports to halt the spread of COVID-19. It later approved the resumption of domestic flights from July 8; and international flights, September 5.

Explaining further the reasons for the ban and the principle of reciprocity being applied to some countries, Sirika said Nigeria was simply following what each country had done to the country.

He said the country would go ahead and implement the principle of reciprocity to all countries that had banned flights from Nigeria.

Some of the countries which had banned flights from Nigeria are in the European Union as the EU included Nigeria on the banned countries on the first of July, 2020 when they opened their airspace.

The minister said that the approved international airlines would operate strictly on the Federal Government approved COVID-19 protocol.

“Intending passengers must register online, pay for COVID-19 test fee and upload the COVID-19 negative result not older than 72 hours before boarding,” he said.

While warning against sharp practices, Sirika warned that any airline caught with passengers without COVID-19 negative result would be punished with $3500 fine for each passenger and the passenger returned if he or she was a foreigner, while a Nigerian affected would be force into an isolation centre and be made to bear the full cost of isolation and treatment.

Reason for bans and approvals

A document released by the minister showed that while Air Peace (a Nigerian local airline) was excepted some the 24 foreign airlines that required ‘Foreign Carrier Operating Permit (FCOP)’ were granted but were still barred due to one reason or another, but most especially for “Restrictions on Nigerians”.

Of the 10 airlines barred from flying into the country, some were barred because the country of origin of the airline has not resumed international flights or that there was no COVID-19 Health Protocols yet for the country.

The Air France whose destination was for both Lagos and Abuja though having the FCOP was barred as “Tourist visa holders not allowed entry”.

The same “Tourist visa holders not allowed entry” was responsible for the barring of the KLM Royal Dutch, whose destination was only Lagos.

Etihad Airways whose destination was Lagos was barred because “Abu Dhabi Open to citizens and residents only”.

READ  Up For Sale: 50 Cent Sells His Mansion for $3 million, Plans to Donate Proceeds to Charity (photos)

Rwanda Air, whose destinations was Lagos and Abuja, was barred in reciprocal due to “No Allowed entry under COVID-19 Protocols” and despite not having the FCOP.

The Air Namibia, whose destination was only Lagos, without the FCOP was barred as international flights have not resumed in the country.

Also, the Royal Air Maroc, without FCOP and whose destination was to Lagos, was barred as the north African country would only resume international flights on 10 September 2020, while the actual flights is slated for the following day. It is yet to be seen if this would be reviewed afterwards.

The same “Tourist visa holders not allowed entry” that affected Air France and KLM was also applicable to Lufthansa, whose destination was both Lagos and Abuja, despite having the Foreign Carrier Operating Permit (FCOP).

The Cabo Verde, whose destination was Lagos was barred as international flights have not resumed in Cape Verde, where it is based.

The same is applicable to the TAAG Angola with Lagos as destination as international flights have not resumed in Angola.

Apart from the American based Delta Airlines; and Air Peace of Nigeria, the other 13 foreign airlines approved to fly into the country were with one condition or another, mostly “Allowed entry under COVID-19 Protocols”.

However, the Kenya Airways, whose destination was Lagos would have its passengers subjected to “Two weeks quarantine” as condition for approving its flight into the country.