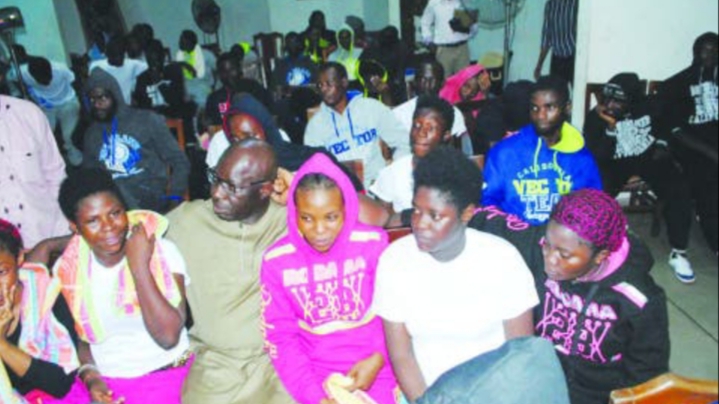 Nigerians who are Libya returness have recounted their bitter experiences and what they went through in their pursuits for greener pastures in Europe countries through Libya after the intervention of Edo State Government.

One of the Libya returnees who is also a beneficiary of the Edo State government reintegration programme simply identified as Esosa said ‘I am glad to return home to start a new life after all the troubles I went through in Libya, in my search for greener pastures. The pain and experience I went through in trying to cross over to Italy were unbearable.

“I lost my friends in the desert and at sea. I will rather stay and invest in my country than risk my life in the hands of smugglers. I am glad to have something doing now,” she said excitedly.

Another returnee who is physically challenged identified as Frank Obeahon thanked and commended the state government for the gesture.

Obeahon noted that if youths were engaged, they would not seek greener pastures anywhere in the globe. Obeahon who shared his close shave with death experience in Libya, was full of gratitude to God for seeing him through.

He said: “People travel out of the country because of the frustration they faced in the country. If they were engaged, many of them would jettison the idea of travelling out for greener pastures. Travelling through these routes is an issue of life and death and the chances of getting to the destination are 50-50 because a lot of people died in the process”.

READ  More Than 300 Die And 1000 Fall Ill In Iran, After Consuming Methanol As Protection Against Coronavirus

Others who would not want their names mentioned in prints disclosed that they were beaten to coma and most times starved for days, for refusing to attend to the men that were brought to the houses they were kept as prostitutes.

Speaking while receiving the latest batch of irregular migrants and victims of human trafficking recently in Benin city, the Edo state capital, the Commissioner for Justice, Prof Yinka Omorogbe disclosed that in the last three years and eight months, the Obaseki-led administration had stemmed the scourge of illegal migration through massive investment in the education sector, in addition to creating various empowerment programmes for the youths.

She said: “These are girls that were trafficked out of Nigeria to Mali where they were rescued. They spent some months with the High Commission in Mali before being transported back to Nigeria, by the Edo State Task Force Against Human Trafficking.

“Since we started operation in November 2017, the task force has been on the ground to receive every Edo indigene brought back into the country.

“We have taken and stored their information in our database. Thereafter, they will be incorporated into our numerous programmes initiated by the Obaseki-led administration to make them independent and employable. We will be seeing to their needs and ensure that they are fully reintegrated into the society,” the commissioner added.

Omorogbe, who is also the Chairperson of Edo State Taskforce Against Human Trafficking, ETAHT disclosed that the state government had so far spent N300 million for the upkeep of the returnees and other logistics within the period.

Also, Special Adviser to the Governor on Media and Communication Strategy, Mr Crusoe Osagie, disclosed that a permanent shelters were being constructed to accommodate returnee Edo indigenes, who were trapped abroad as victims of human trafficking and irregular migration, to strengthen the state government’s rehabilitation and reintegration programme.

Osagie said, “the facilities will enable the state government fast-track short, medium and long-term objectives of rehabilitating and reintegrating the returnees.