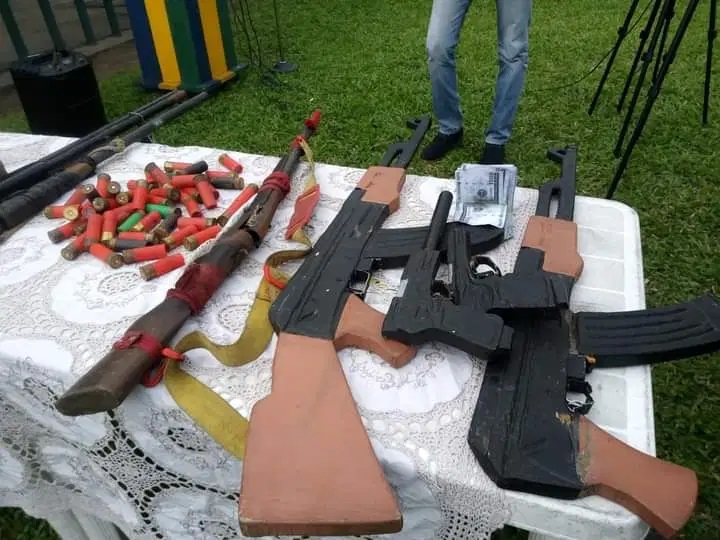 The parade of two movie producers identified as Samuel Bobmanuel and Justice Nwigbara as alleged kidnappers by police in Rivers state has generated controversy as new findings emerge.

Diepreye Precious, a lecturer at the Department of Theater Arts Federal College of Education Technical at Omoku in Ogba-Egbema-Ndoni local government area of Rivers State has revealed that contrary to the claims of the police, he gave the two men alleged to be kidnappers the wooden guns found in their possession.

He said he gave the two men the guns for their movie production.

Speaking on the development, the Theater Arts Lecturer maintained that the movie producers do not need any license from the Police to use wooden gun for movie production.

He said they only need their ID as actors.

The lecturer, who is a member of Port Harcourt branch of National Association of Theater Arts Practitioner of Nigeria and the technical personnel of the association said he will stand by the movie producers.

Recall that the Rivers Commissioner of Police, Joseph Mukan, had in a press briefing on Thursday claimed that the duo of Bob Manuel from Oron in Akwa-Ibom State and NwiIIgbara from Baani in Khana Rivers state were notorious kidnappers arrested by men of police anti-kidnapping unit at Rumuosi part of Port Harcourt when they were planning to embark on kidnap mission.

But Bobmanuel had explained to journalists during the parade that the men of anti-kidnapping unit of Miniokoro saw his colleague, Mr. Nwiigbara at Rumuosi during stop and search and collected his handset.

Bobmanuel disclosed that the Police saw the picture of NwiIIgbara with carved wooden AK 47 rifle in the phone and started interrogating him.

But he added that the Police arrested him and took all the carved wooden guns they used in producing a recent film ‘shooting spree’.

Explaining further, he said “when I wanted to start the film production I approached Choba DPO to give us a realistic gun, but he declined that we cannot use real guns”.

“I approached one of my lecturers since I am a student of Theater Arts and he gave me his own carved wooden guns and promised to bring the licence if Police ask of it “.

The suspects regretted that the Police officers who arrested them at about 4PM (Wednesday) confiscated their phones and refused to allow them to call the Theater Arts lecturer who owns the carved wooden guns.

READ  UK Based Nigerian Lady Jailed For Claiming She Is Homeless While Renting Out Her Own House
Share this Post[?]