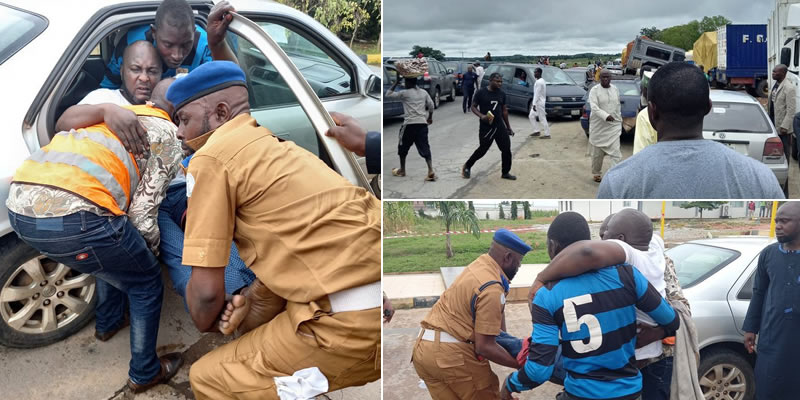 Gun wielding Kidnappers have reportedly abducted Some travelers and shot others on expressway near Olam company, about 28 kilometres to Kaduna, around 2pm on Friday, September 4.

The gunmen who blocked the road along the Abuja-Kaduna Expressway shot at those those who attempted to flee from their siege, leaving many injured.

One of the victims who survived the attack, Ibrahim Baba Suleiman, is the spokesperson of the Islamic group, Jama’atu Izalatil Bid’a, Wa Ikamatis Sunnah, Nigeria (Jibwis).

Recounting his ordeal, Ibrahim said “a fleeing soldier was shot on the chest by the gunmen while a couple sustained gunshot wounds.

“The attack caused more than 1, 000 motorists stranded on the road. It wasn’t until an hour later that some soldiers and policemen numbering 15, chased the gunmen and cleared the road for the motorists to pass.” He said.

See more images from the scene of incident below;